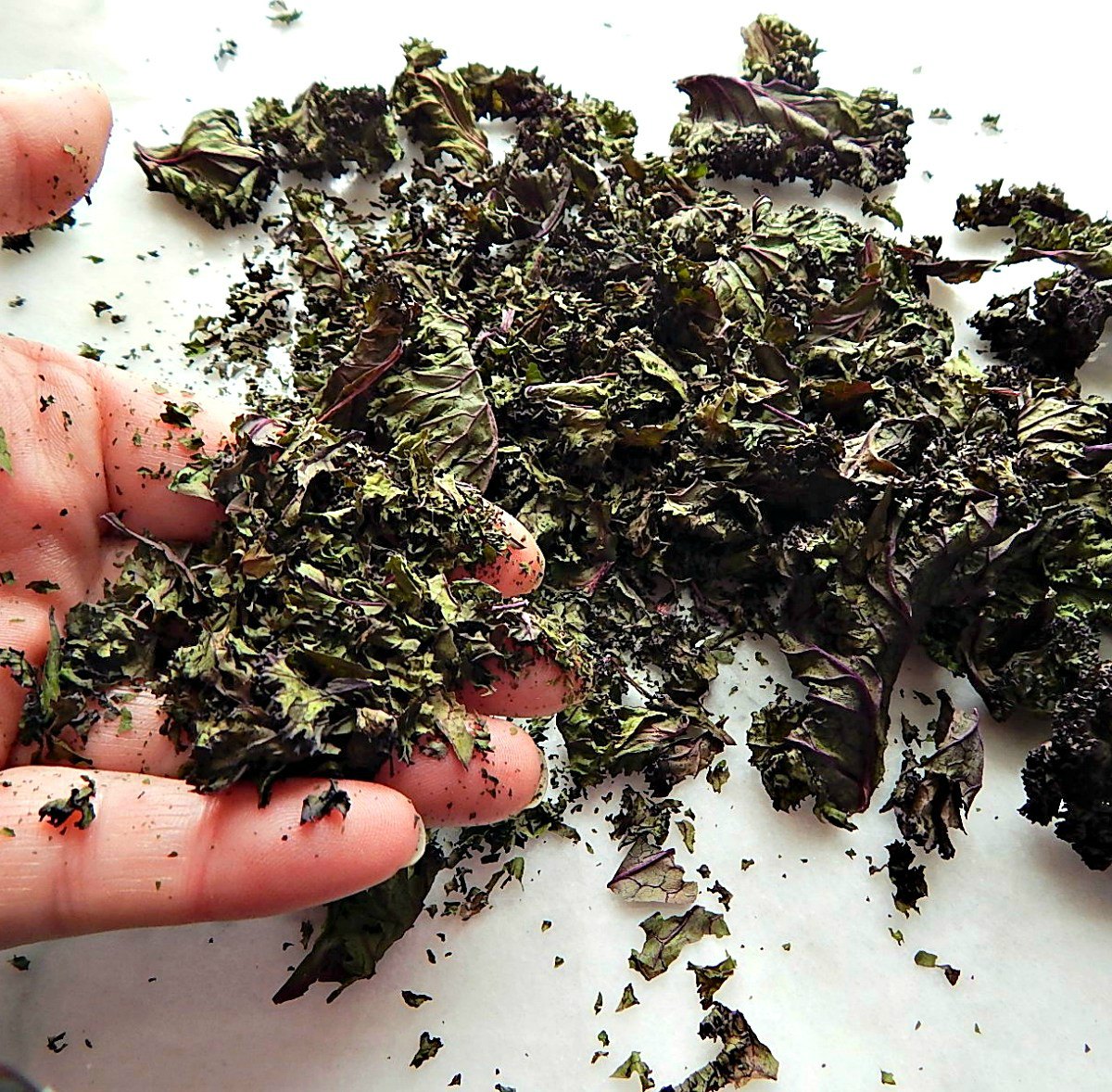 I don’t despise a lot of foods, but Kale Chips rank right up there. I first heard of them on a Melissa D’Arabian show about 10 years ago. I was so psyched I ran right out and picked up kale and made them. The recipe worked beautifully and I tried to like them but I couldn’t stand them. There are recipes out there that add more seasonings and spices and maybe that helps them, but I’ve yet to give it a second go after an initial tasting. What I do love, though, is not wasting food! And that’s why this recipe for Oven-Dried Kale.

And as much as I try not to be wasteful, sometimes the amount of kale in my fridge can be a little overwhelming. Especially if I bought a big bag or maybe got a little overly excited at the farmers market! Usually I’ll have a few ideas of how I’m going to use it up (my Big Fat Green Smoothies on a Budget are one of them) but if I’m waylaid in my plans or my menu “succession” gets thrown off I might be left with what seems like tons of kale crying out to be used – and used now!

And frankly, kale is not a cheap veggie so I don’t want to waste a morsel of it. Nutritionally speaking, it’s a great value, though and worth the price. Kale really is a powerhouse of nutrients and a ranking superfood. You might want to see what The World’s Healthiest Foods has to say about Kale. I love that site; they’re so thorough and so full of information!

The thing about kale is, although for a green it stores petty well and keeps for several days or longer in the fridge, as it ages, it dulls in color and while still perfectly good, becomes more bitter in taste. That’s something to think about if you’re trying to like kale which admittedly can be a bit of an acquired taste. But it’s also something to think about if you have a huge bag of it!

And while Kale can be frozen (that’s a future post) I’ve found that dehydrating it in the oven is a great solution and helps me to prevent any wasted kale. If you have a food dehydrator, of course, you can use that, but if you have a lot of kale, you could literally be drying for days! The oven is quite a bit faster and really does a great job, and gives you perfectly dried kale to add to your smoothies or other concoctions. (Try sneaking dried kale into some of your standard recipes!) Since kale dries up to practically nothing and can be crumbled up, it takes very little room once dried and can be stored in a jar, at the ready. Oven-Dried Kale will keep literally for months, maybe years, but since I have gotten in the habit of drying smaller amounts at a time when I have too much kale to reasonably use, I just keep using what I have.

I’m going to shock some of you. Unless my kale, which I usually buy organic, is looking dirty or there is any sign of “hitchhikers” or other insect damage, I don’t wash it before I dry it and I’m usually a freak about food safety and cleanliness. I’ll shake it off, inspect it, and if all looks good, I trust the heat of the oven to destroy any potential organisms. If it’s not organic, if I have any doubts about where it came from, if I’m concerned about pesticides and/or there’s a lot of dirt, I do give it a wash, but you’ll have to make sure it’s dry when it goes into the oven so it doesn’t just steam; steam will increase the time it takes to dry dramatically. If I think about it, I’ll wash it, spin it and roll it in a towel and chuck it in the fridge the night before.

Speaking of washing, one of the easiest ways is to submerge your kale in water; sometimes I see people say to fill up the sink. Never, never do that! sinks (and counters) are the nastiest places in your home and even I don’t trust the oven to take care of the extreme amount of contamination your kale could potentially pick up. Sinks, especially are a guaranteed breeding ground for all kinds of organisms and even cleaned still aren’t as clean as you think – fill up a big bowl or a huge stockpot with water, add the kale and swish it, then let everything fall to the bottom as the kale floats. Remove the kale and give it a quick rinse under running water. If there are signs of insect damage? It’s unfortunate but an easy fix. Soak for about an hour. Any critters won’t survive and will drop to the bottom when the kale is swished around.

Fair warning on oven drying: all ovens work differently. They cycle heat up and down, circulate air, and retain heat differently. I’ve found this method works great for me but you’ll want to watch, especially the first time, and adjust to what works for you. Jot it down, then the next time you’ll know just how long to dry and you’ll have no worries about letting the oven do it’s thing while you’re occupied with something else.

I found that I can dry three or four large sheet trays of kale at a time, even though my oven only has two racks. I take aluminum foil and make balls, one for each corner of a sheet tray…then I place another tray on top. You’ll probably have to do some rotating and moving around for even drying. You might have other objects you can use if you get creative. Small canning jars, maybe, one in each corner.

Think outside the box when buying kale. Your farmer’s market is probably a great place, but that can vary by season and location. The Buyer’s Clubs and your grocery stores usually have larger bags – they look huge but they’re usually 14 o to 16 ounces so it never hurts to compare that to buying a bunch of kale; sometimes the bagged kale is much more per pound than a bunch, but in the case of kale, that can depend on how many stems are in the bag compared to the amount of stems on the fresh kale. The leaves weigh practically nothing, it’s the stems that add a lot of weight. The fresh kale in a bunch is generally not irradiated or treated like the bagged and might not last as long in the fridge but may have less risk of contamination.

Where you might find fantastic prices on organic kale is from a farmer or small-time grower, especially one who isn’t “certified” organic. It’s a huge process to go through to get the certification and not all farmers are able to pull it off. Just be open-minded. and keep your eyes open, especially if you’re in the habit of already purchasing items from small farmers.

If you’re purchasing mixed bags of kale and other veggies for salads, think about drying them, too! Sometimes those bags are huge and it might be hard for you to eat them to the end, or maybe you’ve just gotten “over” them after several salads. Toss them on a sheet tray and dry them using this method. It’s a great save.

Prevent waste by drying kale; sneak it into smoothies or recipes.

Kale, torn or cut into 2 to 4-inch pieces, large center ribs removed and finely minced (or reserved for another use)

Make sure kale is dried well. Place close together in a single layer on sheet trays; a little overlap is ok. Put in oven, turn oven onto lowest setting. Once heated, bake for about 10 minutes, then prop open the oven door with a wooden spoon or a little ball of foil. Continue to bake, stirring and rotating trays at about 30 minutes. If not completely crunchy, continue to bake, checking every 15 minutes or so.

Kale will need to be completely dry before storing. Store in glass jars.

Timing may vary depending on oven.