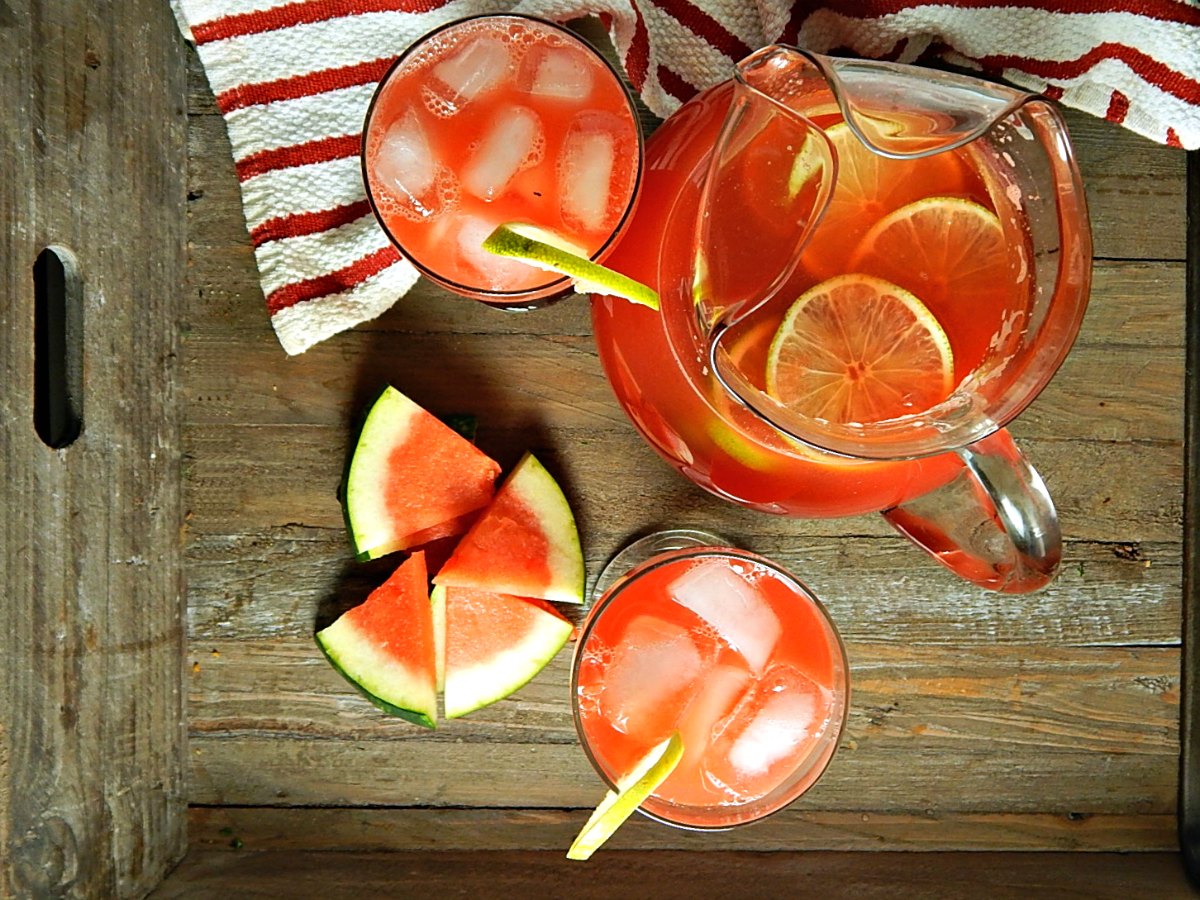 The Fourth July will be here in no time at all! I know because the neighborhood has been crazy with fireworks. When it hasn’t been raining anyway! It’s been like should someone be building an ark? At least I’ve had a reprieve from yard work. I’m doing little things here and there, like deadheading flowers, pulling a few weeds but am waiting on some help with some more major projects. I do know that I want to make this Watermelon Aguas Fresca for the Fourth.

I’ve been loving Watermelon Agua Fresca since I first made Watermelon Sorbet years ago, from a recipe that I think came from Gourmet. I never posted it, but it was fun. That sorbet was made in a bowl and layered, with lime sherbert being the outer edge, then the watermelon sorbet went in the center with little tiny watermelon seeds made from chocolate. Then it was cut into slices. Maybe sometime I’ll make that again. It was a project. But the best thing about that sorbet was I discovered how good watermelon juice is! It’s like drinking the taste of summer.

I don’t know why we don’t have things like Watermelon soda – wouldn’t that be great? But we do have Watermelon Agua Fresca, thanks to our friends South of the Border. If you’re not familiar with Aguas Frescas, the words translate literally to Fresh Water. There are all kinds of Aguas Frescas, made from all kinds of ingredients, but most commonly fruits. I do have one on my site already, my Horchata, which is made from…wait for it…rice. That’s a different animal though.

Watermelon Agua Fresca is really a cool, refreshing drink, and you’ll probably find yourself going on a little kick, maybe even making it for the rest of the summer. It’s easy, it’s simple and it’s messy to make, so prepare yourself! Make sure you have a lot of space to work. All you really do is cut up a watermelon, blend it with a little water, strain it and pour it over ice.

It’s best to plan ahead, and put a pitcher full or two in the fridge, so it’s well chilled before serving. And if you have one of those cute dispensers, this is the perfect time to pull it out, wash it up and have it at the ready.

These days you’ll never know what’s available as far as watermelons. They’re just starting to come into season in some areas, so you might have the old fashioned kind with the seeds. Or you might just have the smaller, rounder ones that weigh around three pounds or so. It doesn’t really matter in terms of making the Agua Fresca because the chunks can go right in the blender, seeds and all since it’s strained out.

Here’s a great place to use, if you have one, one of those juicers that separate the pulp from the juice. If you don’t have one, just use the time-honored method of adding chunks of watermelon to the blender with a little water, then straining. Since everything is so liquidy, it doesn’t take long to strain, and a bit of body is just fine. Just let it go through a metal sieve and don’t try to get it perfectly clear. If you don’t want to strain your juice, you don’t have to, btw. But if you are using one of those toggle dispensers, it might clog up; be prepared for that or just use a pitcher. The pulp will settle.

Watermelons vary in size and juiciness and unless you grab yours and take it over to the scale at the store, you probably aren’t ever going to know how much it weighs. Heck, one store I shop in doesn’t even have any scales any longer! So what I’m saying is it’s hard to guestimate exactly what your yield will be, but I can give you kind of a ballpark idea – I find that smaller, rounder seedless watermelons make about 4 to 6 cups of juice, the larger old fashioned about 6 to 8 cups. Just in case you’re thinking, my goodness, that’s a lot of watermelon for so little yield, keep in mind that this recipe does have water added and is served over ice. And it’s so delish!

And just because I haven’t posted a photo of Chance, my deplorable Lab-radorable for a long time here’s the little rascal in my garden. That’s better than another pic of Watermelon Agua Fresca, isn’t it?

Hi I’m Chance & I like to eat my Mom’s flowers!

When you buy a watermelon, look for them on sale during the peak of the season and pick one that seems heavy for its size. That’s more important than color or minor blemishes. Turn the melon over. The blotch on the bottom (where the watermelon rested on the ground) should be creamy colored not an anemic white. Give it a thump. The watermelon should sound hollow.

You can hone your skills by comparing the sound of the watermelon you’ve picked with several others, especially if you’ve spotted one with a white, rather than creamy splotch. When you cut watermelon, use a clean knife and a clean counter or board and it will last longer in the fridge. A large rubber band will easily hold any plastic wrap in place.

The best time to buy your watermelon is usually before a holiday when they’re almost always on sale; do watch ads, though, because the stores can be very competitive and prices can vary a lot!

Blend watermelon and water in batches. Strain. Chill if desired. Serve over ice. Feel free to adjust proportions to your taste, adding more or less of any ingredients.

Note: yield may vary with different types of watermelon.

I’ll be sharing Frito Taco Salad at Fiesta Friday #279; the co-hosts this week are Antonia @ Zoale.com and Angie of Fiesta Friday!