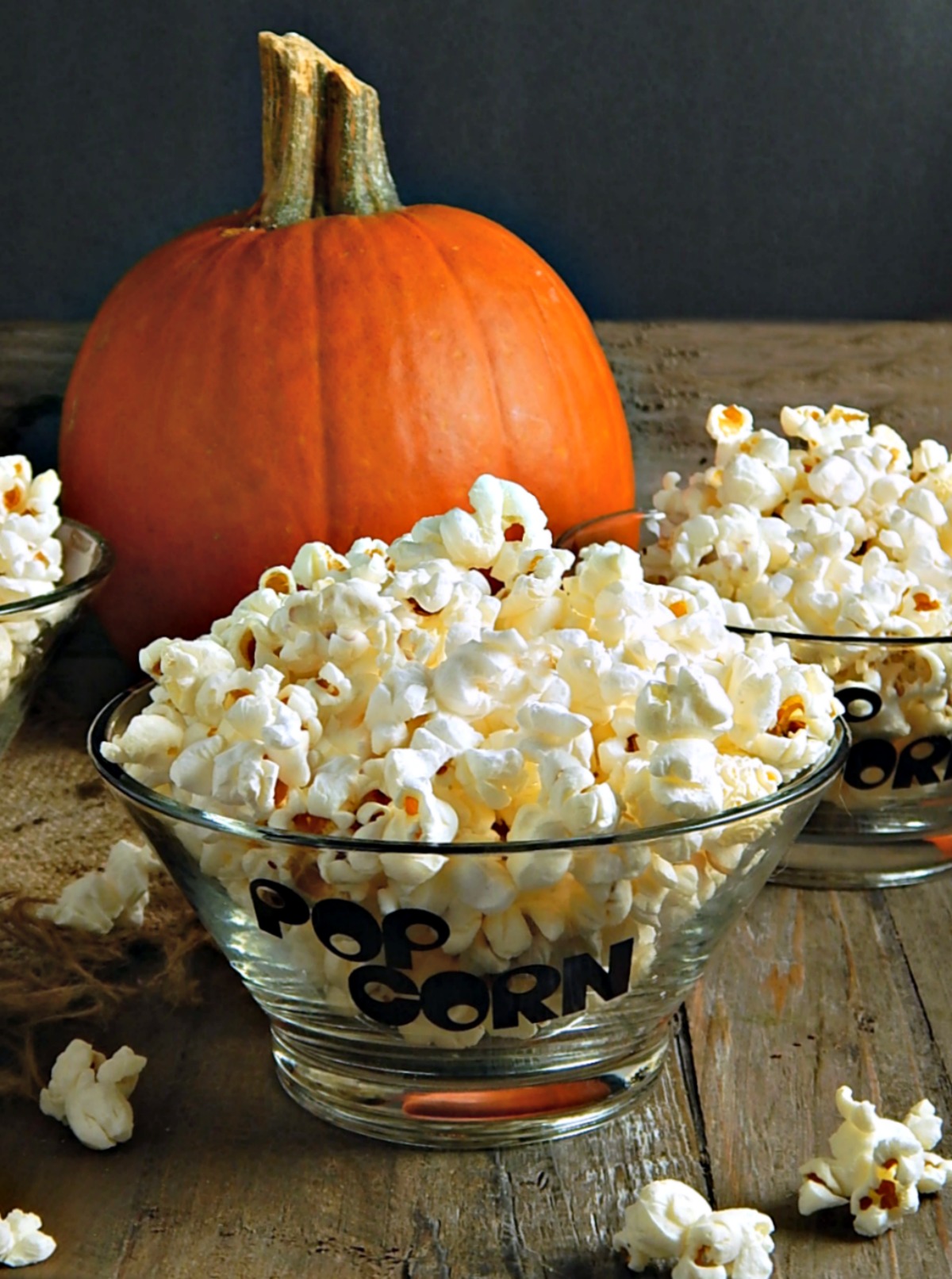 As far as a frugal snack, there’s not much that beats out popcorn. That is if you’re ditching the boxes of the microwave stuff and sticking with a bag or a jar of kernels and making your own Freshly Popped Homemade Popcorn. Yanno, microwave popcorn packets are the biggest rip-off since instant oatmeal packets. Hey, it HAD to be said! I mean really, what’s going to be next? Bottled water, lol?!

Seriously, I get how convenient it is to toss a bag of popcorn in the microwave and have it for lunch, dinner or a snack and I know lots of people that do that. Heck, I’ve done it before, especially when I was hard-pressed at work and needed something fast & easy that I could eat at my desk. And though microwave popcorn may cost 10 to 20 times as making your own, it’s still pretty cheap as a meal substitute. So, yeah, I get it, but it’s not a great practice.

If you’ve been raised on the microwave stuff, or just haven’t had real popcorn in a long time, you might have forgotten just how good simple, fresh popcorn, a touch of salt and/or a little butter can be. I’m gonna tell ya a secret. Shhh! Popcorn isn’t really supposed to taste like an intensely flavored chemical sh**storm. (Although I was surprised that you can buy that stuff in a bottle to sprinkle on your homemade popcorn.) Popcorn is just supposed to taste good. Heck, it might even take a batch or two to convince you of how good real popcorn is. Sometimes ya gotta retrain your palate if you wanna get off the bagged stuff.

And of course, Freshly Popped Homemade Popcorn is a pretty healthy snack, comparatively, to a lot of snacks you might want. And it is a blank slate for all kinds of flavors. The sky’s practically the limit, from sweet to savory. So yes, you can take that healthy snack and do all kinds of things to it. Personally, I love using popcorn in all kinds of party mixes, just in case you thought I might be getting to be too healthy for you! It’s so good with all kinds of add-ins and drizzled with chocolate, white chocolate or melty marshmallow. It’s really a candy then, so check out my menu for Candy if you’d like to see a couple of them. Here’s a preview!

While there can be potential health concerns when dealing with all popcorn (see note at the bottom of the page) the packaged microwave stuff is especially heinous. Best to avoid those all together as they’re not only expensive, they have a lot of packaging, and usually contain trans fat, weird additives, and the bags leach toxins. And need I mention the weird taste of the microwave stuff?

Plus buying a product that contained chemicals known to kill workers for at least seven years before the companies discontinued use? Ughh! I’ll put my money elsewhere and when I eat something that’s particularly unhealthy, it’s going to be something a lot better than microwave popcorn, if you get my drift!

The cost of popcorn varies widely both for the kernels and the microwave versions. I’ve found the inexpensive varieties of kernels in a bag or a box are just as good as many of the pricier brands, which wasn’t always the case. Advancements have been made. Of course, if you’re going organic or for special varieties, expect to pay more.

Here’s what I found, multiplying or dividing to get pricing on the equivalent amounts of microwave bags vs. kernels. By the way, my 2-pound bag was $1.89 & the oil to cook it with, had I made the whole bag is 72 cents. My two-pound bag has the same amount of popcorn as the 36 count box of family-sized Act II, the cheapest microwave popcorn I could find.

The Popcorn Board is a non-profit organization and has lots of fun facts, recipes & even has a kid’s corner. Did you know that October is National Popcorn Month? And that popcorn is a whole grain. Three cups equal one serving from the grain group. Air-popped popcorn has 33 calories a cup, oil-popped, 55 calories and lightly buttered has 133 calories. Check them out for more information.

In the meantime, when you make Freshly Popped Homemade Popcorn, it’s always helpful to know amounts and yields, especially if you are wanting to make any recipes with your popcorn. Here’s a handy-dandy table that will tell you how much popcorn to make for 4, 8 or 16 cups. Just in case you don’t want to do the math! If you are curious, most single-serving popcorn bags make 3 1/2 cups of popped popcorn, a little less than a quart.

Of course, now you need to decide how to pop the popcorn!

Add 3 kernels of popcorn to a pan, add oil to a depth to come up halfway up the kernels. Place on medium-high heat. As soon as the kernels pop, add popcorn, place lid on pan.

Once these kernels begin to pop, shake pan constantly (or turn crank on Whirley Pop) until the popping slows. Once there is a second between pops (count 1001), remove from heat and immediately pour on to a tray or large bowl.

Season with salt and drizzle with melted butter, if desired. Toss.

I’ll be sharing Freshly Popped Homemade Popcorn at Fiesta Friday #246, co-hosted this week by me. That’s right! I get to co-host Fiesta Friday along with Mila @ Milkandbun. Mila is an amazing blogger and baker, a Russian Ex-pat living in Dubai and you never know what glorious specialty she might toss out next.

Notes on popcorn & health. There are concerns in general with the healthiness of popcorn or any corn. Some are concerned about whether or not popcorn is gmo (most is not – popcorn farmers usually use specially developed seed they’ve cultivated for decades) or whether pesticides are used. Some worry about the heating of oil and others about carbohydrate levels and the level of Omega-6 fatty acids. For more reading on popcorn, check out what the World’s Healthiest Foods has to say. Popcorn is best as an occasional snack.