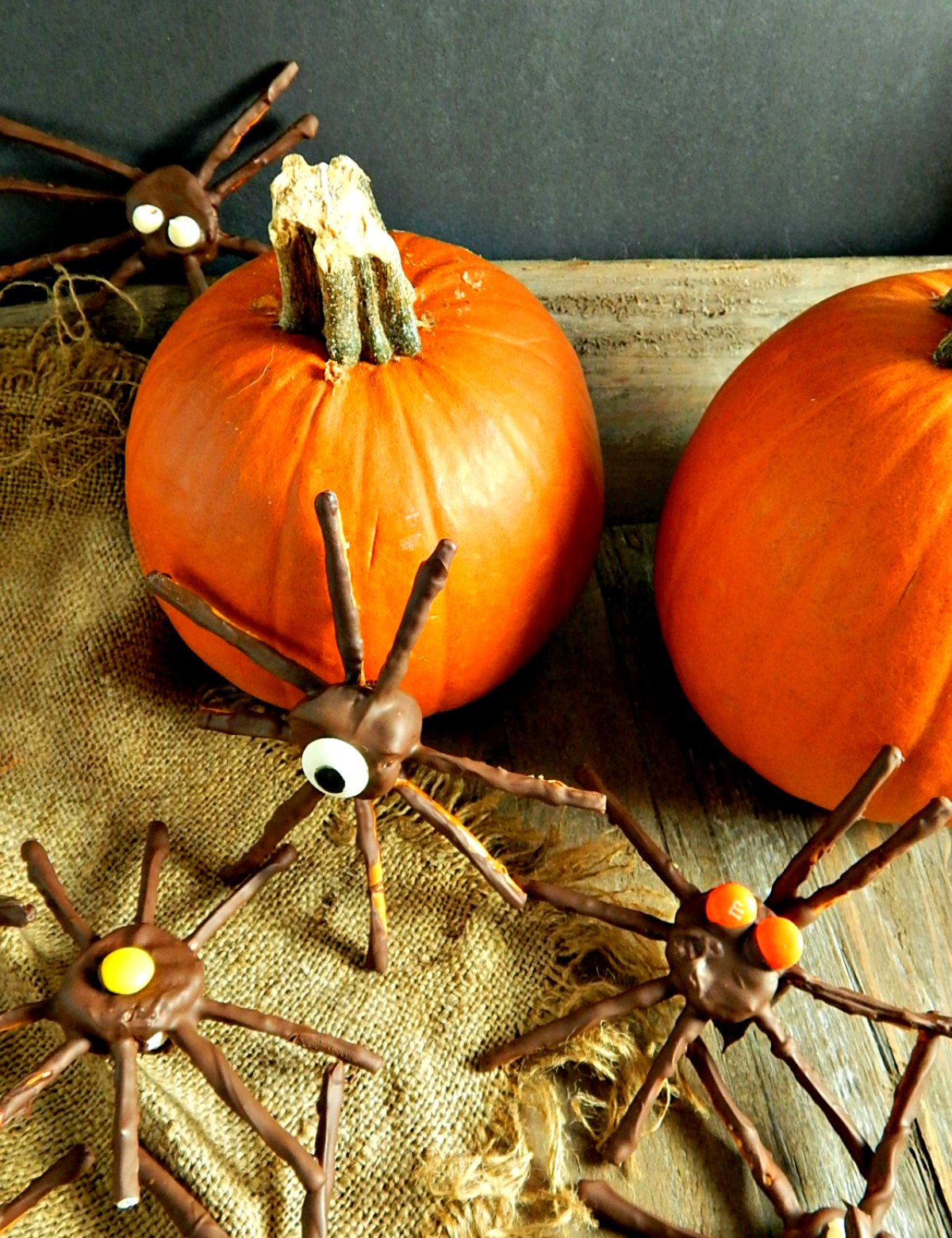 This Halloween season I’m really missing my grandkids. It didn’t help that I watched a stupid show on the Hallmark Channel. Well, maybe not stupid, but I’m calling it that because it got me all teary eyed. You probably know the kind of show I mean. It was Halloween. The nanny won over the kids, they all fell in love, then Dad came around for the ride. So I got to thinking about what I would like to make with my grandkids and these Chocolate Dipped Halloween Spiders won my heart.

I’m not a big decorate food kind of person. I lose patience after a while have been known to, on one occasion or another to just start eating the components! These were, fun, though, if a little fussy and frankly, a little messy. Anything chocolate dipped is. I think they’re adorable if a little rustic! Hey, I’m keeping it real, here, folks!

I saw some other Halloween type spiders and actually started with those. They had a peanut butter ball center that had been dipped in chocolate but they left me kind of “meh.” The best part was where the chocolate had spilled on to the pretzels. That’s when I looked at the marshmallows that were sitting in my basket on the microwave and had an “aha” moment.

I could stick my pretzel sticks in the marshmallows to make legs, then dip the whole thing in chocolate! I have to say it worked rather well. And Chocolate Dipped Halloween Spiders are super salty, sweet delish!

There’s no doubt that my Chocolate Dipped Halloween Spiders are a bit rustic. That’s part of my skill set, so yours might be better, but since I was thinking Halloween, kids and fun, I just rolled with it, and embraced it.

Because a whole marshmallow would have been just too much, I snipped my standard marshmallows in two, slapped the inside sticky part on my counter (it helped hold the marshmallow in place and then the smooth side is up) and started inserting the pretzel sticks right into the marshmallow. That’s a little trickier than it seems, and little hands might need some help and some of the pretzels break and then you have to eat those…if you’re not so darned set on having 8 legs, it’s a little easier. If you put a pretzel in each hand and insert on opposite sides at the same time it works better.

I used a bag of standard Nestle chocolate chips, melted in the microwave in a shallow bowl with just a teaspoon of cocoa butter (shortening will work, too) to keep it smooth. I’ve been having trouble lately with the chocolate chips seizing, so I didn’t use my standard one minute, then stir, then stir every thirty seconds as I’ve done for decades. Something must be changed in those chocolate chips because three batches seized on me a while back using that timing. (Anybody else notice this?) Instead, I stood there and watched it like a hawk. I went with 40 seconds, then opened the microwave about every 20 seconds and stirred. When it was melty, I added the cocoa butter. Viola!

This works best with a flat-bottomed, shallow bowl that’s just a bit larger than your spiders. I used the same ones I used in my Classic Shepherd’s Pie and it worked perfectly. If whatever perfect sized bowl you find isn’t microwave save, melt the chocolate in something else and transfer the chocolate into it. The bowl has to be shallow or it will be hard to get the spideys out. Dip the spiders top side down, but don’t completely submerge them. They’ll kind of sit on top of the chocolate. Make sure to spoon some of the chocolate on the sides of the marshmallow – that chocolate will help hold the legs in place. You might need to gently press the spider legs a bit to make sure they’re coated on what will be the top side. Don’t put any chocolate on what will be the bottom of the spider once the spider is turned back over. It’s ok if some gets on there, but it makes it easier to pick up the spider and eat if that bottom isn’t covered in chocolate.

Flip the spiders over onto a rack set over a parchment lined tray to catch any drips and remove them after the chocolate has set but isn’t completely hardened, to another tray. If you leave them on the rack, they’ll meld to it and be the dickens to get off and unless you have a lot of racks, you’ll need to reuse the ones you have. The spiders are pretty large and only a half dozen or so will fit on a standard rack at a time. Oh, and decorate before the chocolate dries! If your timing is off, you can use a torch to gently heat the top of the spider until the chocolate has softened a bit and your decorating items will then stick.

We all know that spiders have multiple eyes, but there’s not enough room for that. I just raided the cupboards and my decorating stuff for a few options. I had couple googly eyes and they’re super creepy. I added some m&m’s on some of the spiders for eyes (I kind of stood some up) and others just got a spot on their back like a spider that was once on my shoulder in an economics class. That instructor was not pleased with the blood-curdling scream echoing through the lecture hall. And then I used a few white chocolate chips on others.

Raid your pantry or cupboard or get down to the craft store and see what inspires you and the kids. Give the chocolate a few minutes to start to set and then apply whatever you and the kids can get to stick to it! I thought these made kind of a fun display for a party, maybe a few could be hung from a thread so they dangle.

Pick up your standard baking chips and other items while they’re on sale, usually around holidays and the same goes for any “junk” food like pretzels. This made about 2 dozen spiders but that’s not necessarily set in stone and may make a couple more or less depending on how thick the chocolate coating is. If you get tired of making these and have chocolate left or need to clean out your bowl when you’re done, a marshmallow or two swiped through the remaining chocolate works wonders. Just sayin’.

Sometimes it’s best to use quite a bit more chocolate than you need to make dipped items like this. The Spiders get more and more rustic as the chocolate in your bowl dwindles. If you want to use more chocolate, you’ll like have more left at the very end. And if you have more chocolate left than you want to just eat, dollop it onto some parchment, let it harden back up. Save all the bits of chocolate and candies and so on during the holiday season and make some glorious free-form chocolate bark to use up all the odd ends when you have enough.

Carefully melt chocolate chips in a shallow bowl large enough to hold the finished spider. If melting in the microwave, to prevent seizing, try going for 40 seconds, then stir, then use 2o second intervals, stirring each time. Stir in the teaspoon of coconut oil or shortening until incorporated.

I’ll be sharing Chocolate Dipped Halloween Spiders at Fiesta Friday #246, hosted this week by me. That’s right! I get to co-host Fiesta Friday along with Mila @ Milkandbun. Mila is an amazing blogger and baker, a Russian Ex-pat living in Dubai and you never know what glorious specialty she might toss out next.