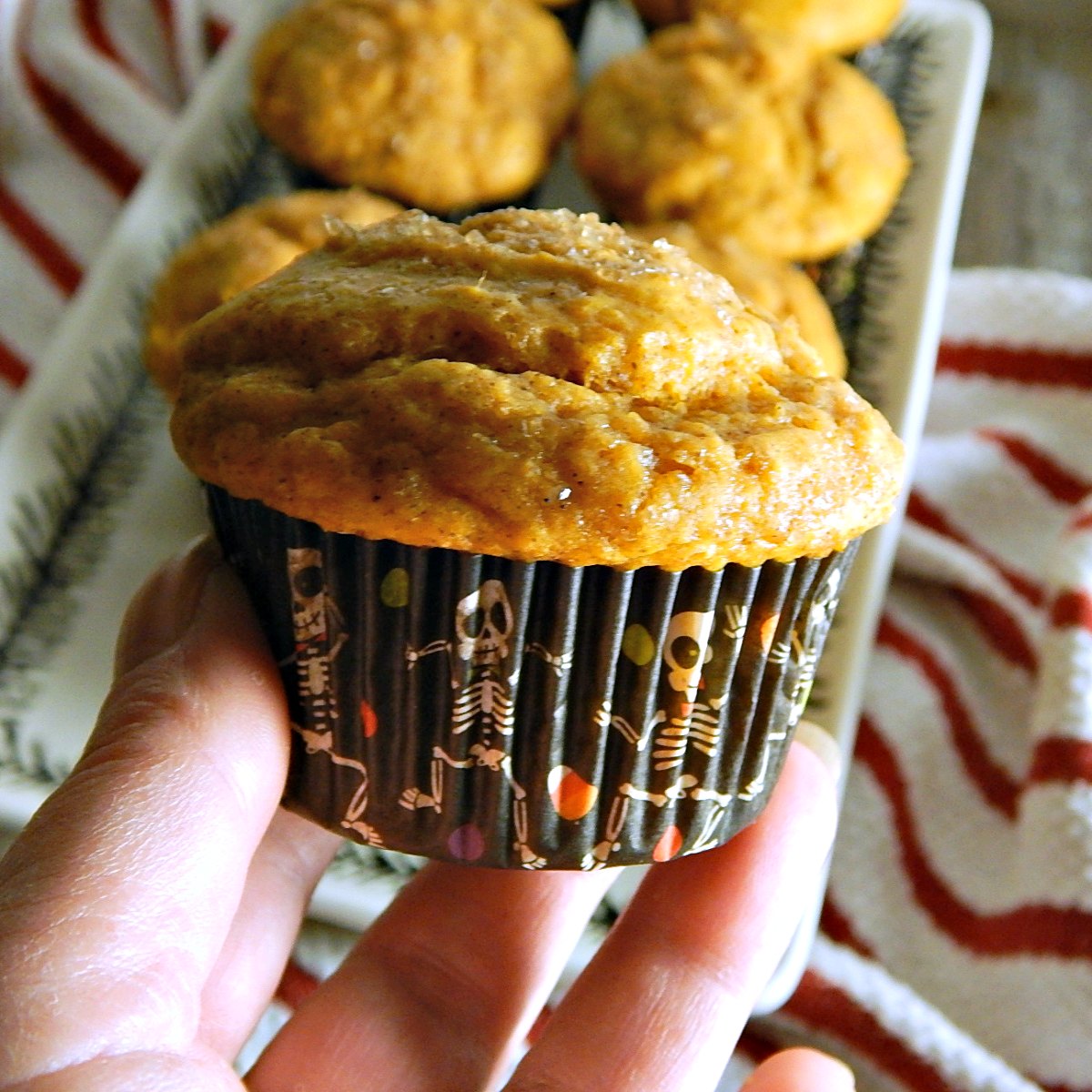 I’m trying to keep a little balance with the food I make, so I thought I’d give these Healthier Cinnamon Sugar Pumpkin Muffins a shot. I always have the idea that if I’m gonna to eat something, I’m gonna eat the best, crazy, good and over the top of whatever it is, and just eat less of it. Well, that really doesn’t really seem to be working out for me that well.

What I do know is some of the “healthier” recipe options require a little retraining of the palate. You know, probably what I mean – lower expectations, I guess. And some healthier baked goods sometimes are a little strange. It’s the texture, really that usually suffers. I was really pleased with the texture of these Healthier Cinnamon Sugar Pumpkin Muffins; it’s quite beautiful.

What I did have to get used to with Healthier Cinnamon Sugar Pumpkin Muffins is the barely sweet taste. They’re almost savory, even with the bit of cinnamon sugar topping. You might laugh at me, but the best way to eat these is upside down. The sugar topping hits the tongue first, and makes them taste a little sweeter! Try it if you make these muffins! I’m actually tempted to omit that sugar topping and serving them alongside soup to fill out a meal. It’s been a long time since I’ve heard of or have seen a recipe for savory muffins but I do remember my Mom serving them now and then. I think these would go great with any squash or curry soup, maybe sweet potato or something else along that line.

Like most muffins, Healthier Cinnamon Sugar Pumpkin Muffins are a cinch to make. As a matter of fact, these are almost easier because they are made with a little oil, so there’s no butter to cream or melt.

Make sure to spray the muffin liners with cooking spray. The muffins are lean enough so that they’ll stick and be hard to peel off if you don’t. I know that’s strange but trust me on this!

I pick up most of my baked goods at Aldi, where the prices rival the sale prices at my regular grocery. Before we had an Aldi, I’d really watch the holiday sales, especially around Thanksgiving, Christmas, and Easter when baked goods are at their lowest and producers often put out scads of coupons. Then I’d stock up. I haven’t mentioned it for a while, but anytime I bring any flour or flour-based items into my home, they go right into the freezer for three days. That eliminates the possibility of bringing any “peskies” into the house. Greek yogurt is another great pick up at Aldi item, along with the eggs and milk. I do like to buy Greek Yogurt at Costco, too, where it runs about the same price as Aldi but is in a bigger container! Bonus, right?

Pumpkin is something I used to see on sale a lot in the fall, but I’ve noticed that it doesn’t happen as much. I do stock up when I see it, and love to check the bins or racks for items nearing their “buy by’ or “best by” dates or priced for a quick sale after the holidays. Believe it or not, cans of pumpkin seem to make a better pie if you hang on to them for a year. I suspect the natural sugars in the pumpkin kind of caramelize a bit in the can, kind of like cans of condensed milk do it they sit for a while. Do be sure to rotate your stash of canned goods as you buy them, especially if you are in a habit of stocking up.

Make sure to have a use for the partial can of pumpkin puree you don’t use in this recipe. I plan ahead and make my Pumpkin Spice Lattes. I know, I know, I said sometimes I get tired of Pumpkin Pie Spice, but a girl’s gotta have a little spice in her life, right? Those lattes use three tablespoons of pumpkin puree, so sometimes I drop them on a parchment lined sheet tray and freeze them, then add them to a Ziploc bag so I can make the Lattes whenever!

Healthier Cinnamon Sugar Pumpkin Muffins – I fell in love with my day of the dead cupcake liners!

Spoon batter into muffin tin, filling each cup almost to top. (I used a half cup scoop but had to add a bit more batter to each muffin when I was done.) Sprinkle with cinnamon sugar.

Bake for 20 minutes, or until a toothpick comes out clean. Cool 5 minutes in pan on a wire rack, then remove from pan and allow to continue to cool. Serve warm or at room temperature.

I’ll also be sharing at the Lazy Gastronome. Helen posts a weekly link up, What’s for Dinner?