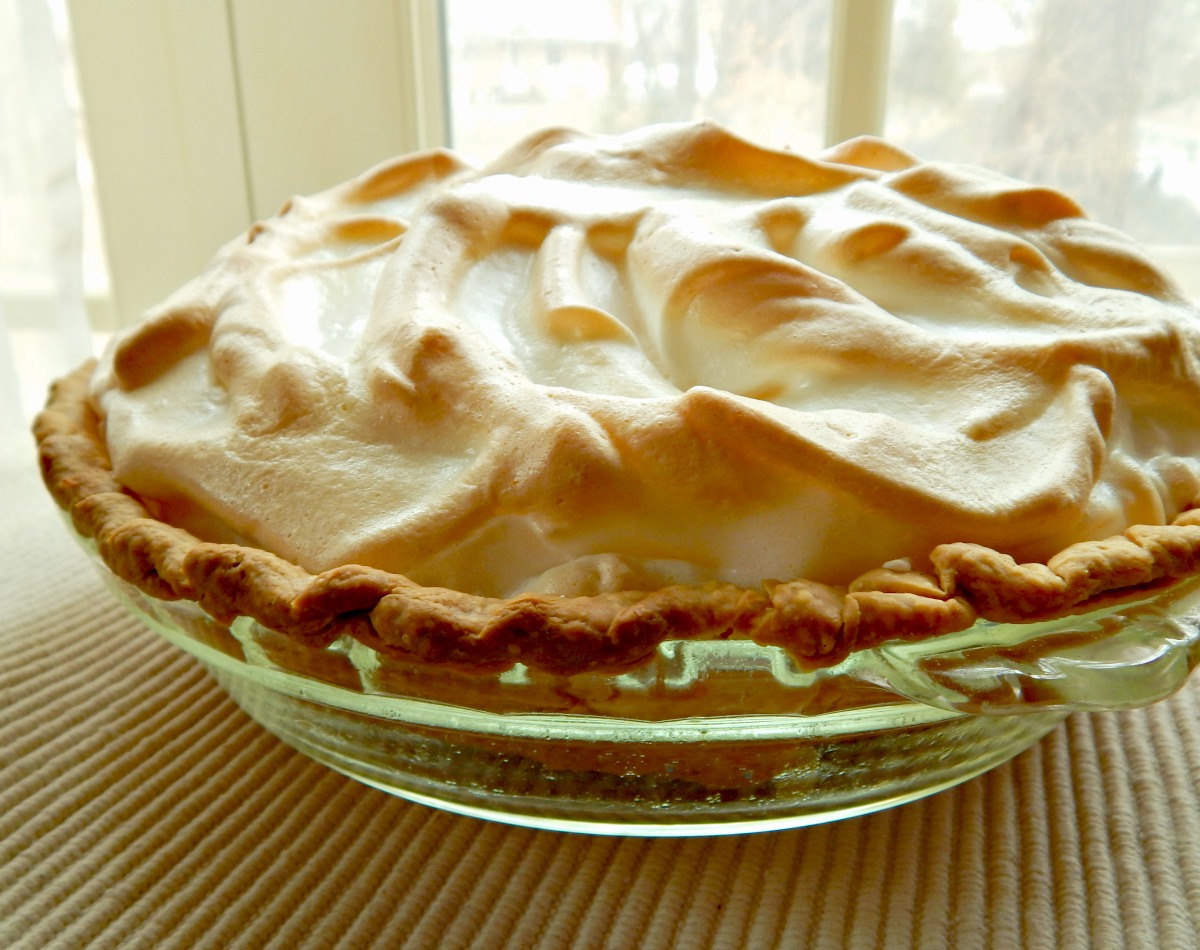 I have many recipes that I’ve changed up over the years, but not this one for the Lemon Meringue Pie Cook’s Illustrated version. It is absolute perfection in every way and gets rave reviews. The lemon filling is intense and tart, just a little sweet with a gorgeous texture. The meringue is perfect – it’s like a tasting a fluffy cloud of sweet deliciousness.

This lemon meringue pie looks a little funny – because Gibs knocked it off the table and ate half of it before my pics!! I was able to salvage a couple pieces for the picture.

These geniuses at Cook’s Illustrated are well known for making over every day to exotic recipes and they absolutely nailed this pie. As a matter of fact, I liked lemon meringue pie before, but since making Lemon Meringue Pie – Cook’s Illustrated Version, I’m in love with it!

Any lemon meringue pie is a bit of work, and this one is no exception but this pie is SO worth it! It’s the pinnacle of pies! Even people that are lukewarm about Lemon Meringue go on and on about this! You’ll hear it, “Wow, I didn’t think I liked Lemon Meringue, but this is so good!” Just smile and say “Thanks! I’ve printed out the recipe, would you like a copy?” as everyone gushes on!

Cook’s has solved every potential pitfall a lemon meringue pie could possibly have. If you know Cook’s Illustrated, you know their recipes are the BEST but there’s always a few fussy steps. The first time I made this pie, I was absolutely unprepared, didn’t have the right dishes in the right amount and by the time I was done my kitchen was a disaster and I was pretty stressed. Until I tasted the pie!! All was forgiven! (And Gibson my dog liked it, too, and knocked it off the table before I even got pics. So this is “lab” approved.) I’d say that’s a testament as to just how well this pie holds up.

I’ve made the Cook’s Illustrated Lemon Meringue Pie enough times to know that the pre-pie making set up is critical.  You’re going to dirty a lot of dishes and need to have everything on hand before you start. The recipe moves quickly and the timing is everything. I’m going to guide you through so you won’t have a stressful nightmare of a time with this recipe and a massive clean up later! I’ll point out a few places where there could be potential trouble in the recipe so you can avoid any pitfalls. We cooks usually just pick these things up, but why, when someone can tell you?

Here’s the kitchen equipment you need when you make the Lemon Meringue Pie, Cook’s Illustrated Version. Help yourself out and have it all at the ready:

I don’t want to discourage you in any way about making Lemon Meringue Pie – Cook’s Illustrated Version, but I do know the first time I made this, I was not prepared in any way shape or form and I’m an experienced cook. I ran short of bowls for one and was pulling dishes out of the dishwasher and washing them to use, and was piling dirty dishes all over my counter, well, you get the idea!

Working with the Cornstarch Mixture & Meringue:

There’s some timing in this recipe to be aware of. The lemon filling part of the pie is started first, then the meringue is going to be dolloped over the warm filling.

There’s an extra little step in this pie makes for the most luscious, well-behaved meringue you’re ever going to have. A little cornstarch and water mixture is heated up, then cooled to room temperature and then whisked into the meringue.

So right away, you can see you’ll be dealing with three different parts of this recipe, almost all at the same time. Cook up the filling, cover it with plastic wrap to keep warm, then mix up and cook and cool that cornstarch mixture; it’s a small amount and takes just a couple minutes. When that’s cool, add it to the meringue. When the meringue is done, turn back to that filling. Heat it up if needed, pour it in the crust, then dollop it with the meringue.

And don’t worry, you got this!! And it’s all going to be so worth it!

Grate first and then zest lemons, reserving a tablespoon of the zest and 1/2 cup of lemon juice. Use a fine grater and cover the zest so it doesn’t get dry and it will be unnoticeable in the pie.

Divide eggs: note you’ll need six yolks and only four whites, so use another small bowl for the extra two whites. This is best done by working with one egg at a time over a small bowl or cup. Crack the egg, let the white drip into the cup, then put the yolk in one bowl and the white in another. Repeat, breaking the egg over the now empty bowl.

Have all ingredients ready and within easy reach.

In a heavy medium-sized pan, mix together the sugar, cornstarch, and salt. Whisk in water and bring to a simmer, whisking constantly. When mixture starts to turn translucent, (it will still be whitish, but you’ll see the difference) working quickly and whisking vigorously, add in egg yolks, two at a time. Whisk in lemon zest, juice and butter. Return mixture to brief simmer, whisking constantly, then remove from heat. Lay sheet of plastic wrap directly on surface of filling to keep warm and prevent skin from forming.

Mix together cream of tartar and sugar, set aside.

In a small saucepan, add the tablespoon of cornstarch, then whisk in 1/3 cup water. Bring to a bare simmer and cook, whisking occasionally, until it becomes just thickened and translucent looking, 1 to 2 minutes at most. Remove from heat, transfer to a small bowl (so it doesn’t continue to cook from the heat of the pan) and let cool slightly to barely lukewarm as the eggs are being whisked.

If using stand mixer, fit it with the whisk. Beat egg whites and vanilla at medium low-speed until foamy and frothy. Turn the speed up to medium-high and add, a tablespoon at a time, the cream of tartar and sugar mixture. Beat until incorporated (it won’t feel grainy when you run a bit between your fingers) and the mixture forms soft, billowy mounds.

While continuing to whip, add the cooked cornstarch mixture, about a tablespoon at a time. As it’s added, place it between the beaters and the side of the bowl. Continue to beat until stiff, glossy peaks form, about two to three minutes longer.

If filling is not still hot, during the last minutes of beating the egg whites, remove plastic and return to very low heat for just a moment or two to warm.

Using the back of spoon, create attractive swirls and peaks in the meringue. (I personally like to use the spoon to make small “scallops” with only a very few peaks which prevent the peaks from over baking before the rest is nicely browned.) Bake until meringue is light golden brown, about 20 minutes.

Cool to room temperature on a rack (at least two hours, Cook’s says, but count on three & half). This pie is at it’s best the same day.

Have all ingredients ready; this is most definitely not a measure and ready it as you go recipe. Timing is critical.

Save extra zest & freeze for emergencies!

Save & add one every day to green smoothie

Choose citrus by WEIGHT not color – color means nothing.