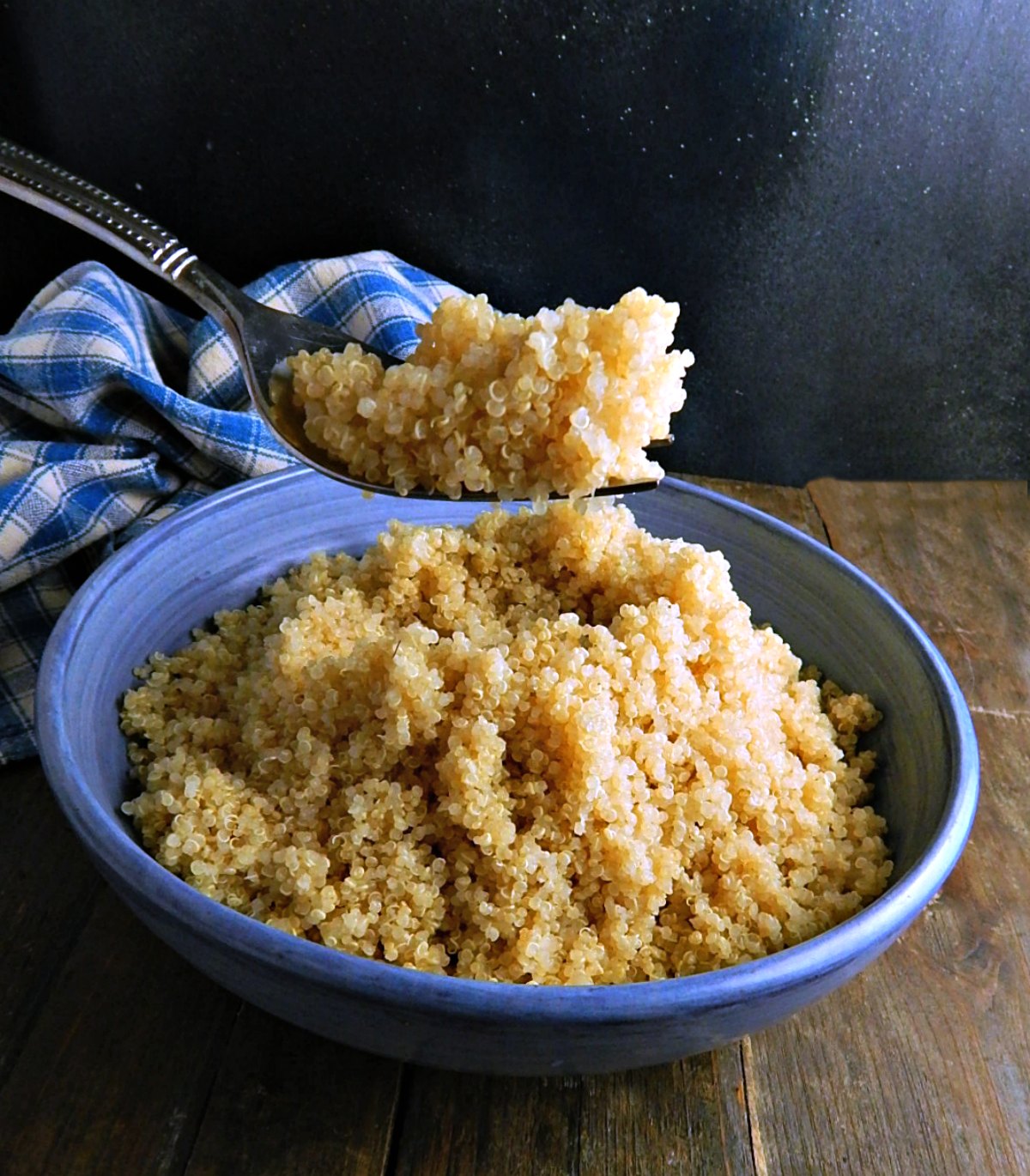 I remember when Quinoa first came on my radar, years and years ago. It was supposedly a “rediscovered” ancient grain and no one knew how to pronounce it (KEEN-wah), let alone cook it!! Well, it turns out that people have been eating Quinoa all along, even if we in the States haven’t, it isn’t a grain at all, it’s a seed and it IS possible to make Light Fluffy Quinoa in the Instant Pot or on the Stovetop.

Best of all, it’s EASY to cook Quinoa right – and actually, it’s just as easy as cooking it wrong; just a few hints make all the difference! And while I’ve always done mine on the stove, just like rice, I’ve more recently turned to my Instant Pot. No more pots to watch, no boil overs and perfect light and fluffy quinoa every time. Of course, if you don’t have an IP, it’s still easy to turn out Light Fluffy Quinoa in the time-honored way on the stove, especially if you’re not forgetful like me.

There are many varieties of Quinoa, but there are three that are easily available here in the US, Red Quinoa, Black Quinoa, White (Ivory) Quinoa. All have a natural coating, called saponin. That coating can give quinoa a bitter taste that some people notice more than others. Washing or rinsing the quinoa removes that coating making your Quinoa less bitter with a milder flavor, with less of an earthy taste and a slightly softer texture. Some Quinoa comes prewashed.

You’ll find slight variations in the taste of different Quinoa varieties. Personally, I love quinoa; it’s delicious without tasting too “crunchy.” The white is the mildest, so if you’re just starting to eat Quinoa, that might be a good choice for you. All the quinoas are super healthy (Hey, it’s not called a Superfood for nuthin’) but the colored varieties have an edge. See what The World’s Healthiest Foods has to say about this wonderful seed; there’s so much more than I have time or space to mention here!

That it’s packed with protein, and you’ll often see Quinoa referred to as a complete protein, is just one of the many qualities that should earn Quinoa a place at the table. A complete protein, in simplistic terms, means that of the 20 amino acids needed for your body to utilize protein, humans produce 11; the rest is supplied by the food you eat. Those nine we don’t produce are called essential amino acids, and when a food contains all nine, it is a “complete” protein. Quinoa has all nine. It also has about 8 grams of protein per 3/4 cup serving and 32 grams of carbohydrates.

Use Quinoa any place you’d normally use rice, and don’t forget to add it to your salads and bowls. Eat it as a breakfast porridge, toss it into soups, sneak it into breakfast cookies. If you’d like more inspiration, check out 50 Creative Ways to Eat Quinoa from Greatist.

Light Fluffy Quinoa – the Instant Pot Tells All – No Sticking

First of all, how do you know if your Quinoa is washed or unwashed? It might say washed or pre-rinsed on the package, but if not look at the instructions. If it says to rinse, you can bet it’s not been washed. And if you’re buying in bulk, it’s a safe bet it hasn’t been washed. Let’s talk about rinsing that quinoa. If it’s prewashed, toss it in a fine-mesh strainer (quinoa is very small) and run it under a strong stream of water for a minute or two, fluffing it around a bit.

If it’s not washed, I handle it just like I do rice. To a strainer large enough to hold the quinoa with enough room to swish it around, add the quinoa. Place the strainer with the quinoa into a bowl larger than the strainer. Run tepid water over the quinoa while swishing the rice around and scraping it against the strainer. When the bowl fills, empty and repeat the process until the water in the bowl is mostly clear. It usually only takes a time or two.

Whether you’re doing a quick rinse of prewashed Quinoa or a more complete wash of unprocessed quinoa, prop the strainer over a bowl or something to keep it off the bottom of the sink and allow it to drain. A few dribbles are fine, but you don’t want streams of water. It will throw off your quinoa to water ratios when it’s cooked. Do yourself a favor and immediately rinse off your strainer to get any stuck quinoa off it – once it dries, it’s the dickens to remove.

Rinse Quinoa in a strainer over a pot; when the pot fills, dump water and repeat

Quinoa, perfectly cooked should be just a little al dente. Soft, but with a bit of chew and most of the “tails” which are actually the very nutritious endosperm, still attached. You can make any quantity of Quinoa you want, either on the stove or in the Instant Pot, within reason. Make sure to allow for the expansion with either method. Quinoa will swell to three times the volume once cooked. Bonus: that makes Quinoa ideal for meal prep and Quinoa freezes well, too, if you’d like to bag and tag it. Just thaw in the fridge overnight and reheat in the microwave.

For added nuttiness, Quinoa can be toasted prior to cooking. Heat about a tablespoon of oil per cup of Quinoa in the pan or pot over medium-high heat. Toss in the quinoa and stir for two to three minutes until you see a slight color change and smell the nutty aroma.

For a little added flavor, cook the Quinoa in broth or stock, just be careful about adding salt if the broth or stock is already salty. And of course, you can take a nod from cooking rice and turn it into a pilaf by sauteeing a few aromatics or other finely diced vegetables (onion, celery, bell pepper, carrots and/or mushroom along with a little garlic) before adding in the quinoa and feel free to add any favorite herbs and/or spices. Both rosemary and thyme go well with quinoa, but don’t feel limited to just those two. So many herbs and spices are available.

Whether you cook your Quinoa in the Instant Pot or on the stove, for easy cleanup, don’t let the bit of quinoa left in the pot harden and dry. Rinse off right away when you remove it to the serving bowl.

Place Quinoa in a saucepan with twice as much water or stock and a bit of salt, if desired. Bring it to a boil and immediately add lid and turn down to a bare simmer. Cook for 15 minutes for al dente, when the quinoa is just starting to form little tails. Remove from heat.

Now here’s the secret for light fluffy quinoa: when you remove the pan from the heat, place an absorbent, clean kitchen towel over the top of the pan and cover with the lid. Let the Quinoa rest for about five minutes, then fluff with a fork. Excess moisture in the Quinoa will have been absorbed by the towel leaving your quinoa with the perfect light and fluffy texture.

In the Instant Pot, you’ll need less water or stock and a touch of oil. The oil is going to keep the quinoa from sticking, both to itself and to the instant pot; gummy quinoa isn’t pleasant! There are a lot of different methods for perfect Instant Pot Quinoa, but I like a ratio of 1 to 1 1/4 quinoa to water or stock and a teaspoon of oil for every cup of quinoa. And don’t forget that touch of salt.

I’ve tried many different methods to cook Quinoa in the Instant Pot, but my favorite is to cook it fast and quickly. 1 minute at High Pressure and a 10-minute natural release. Then just release the remaining pressure manually. If anything other than steam comes out of the release valve, stop for a minute then proceed.

Remove the liner, quinoa and all from the Instant Pot, cover with an absorbent towel and a lid. Let the Quinoa rest for about five minutes, then fluff with a fork. For some reason, items like rice and quinoa cooked in the Instant Pot seem a bit softer and more delicate when finished. I make a point to carefully remove the quinoa with a wide, thin spatula; it can scrape across the bottom and it won’t crush the quinoa like a big spoon does.

Quinoa may not be cheap to buy, but its a good value for your money. It’s packed with protein, nutrients, and flavor and it’s a great way to up your nutrition game.

It does pay to shop around, even at a single grocery store. Check the rice & beans aisle, the bulk aisle, and the health food aisle. You might need a calculator to figure out which is the best price. And of course, if you’re up to shopping around, compare prices at different stores; I’ve found they vary wildly.

For three cups of quinoa, cooked:

Place Quinoa and water in a pot, add salt. Bring it to a boil and immediately add lid and turn down to a bare simmer. Cook for 15 minutes for al dente, when the quinoa is just starting to form little tails. Remove from heat. Place an absorbent, clean kitchen towel over the top of the pan and cover with the lid. Let the Quinoa rest for about five minutes, then fluff with a fork.

To the bottom of the liner, add 1 teaspoon oil. Add quinoa, then salt, then water, using the water to wash down any quinoa stuck to the sides of the pot. Seal and set to High Pressure, 1 minute. Allow a 10-minute natural release, then manually release any pressure. Working quickly, remove liner from the Instant Pot, cover with a clean towel, lid and allow to sit for five more minutes. Fluff with a fork. For best results, use a thin spatula rather than a spoon to remove quinoa from the liner.

Some of my favorite ways to use Quinoa is in Salads and Salad Bowls: