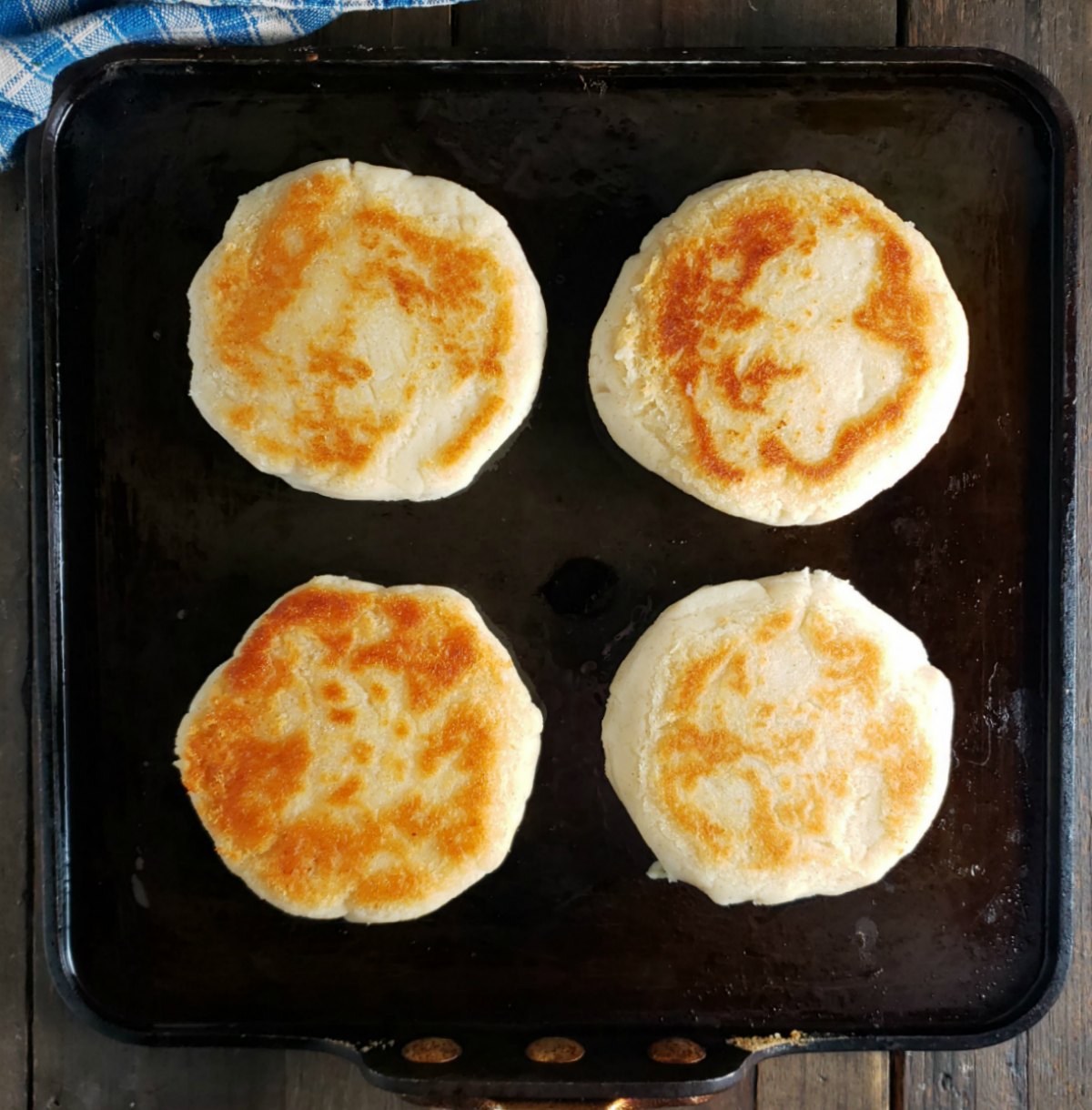 How many of you guys have had Arepa? They’re little “buns” as best as I can describe them that originated in pre Columbian times in South America, but that doesn’t give much indication of what they taste like! They’re made out of a type of fine cornmeal, and they’re kind of like a Gordita and they’re warm and fragrant and can be filled with all kinds of things, stuffed with pretty much whatever your heart desires! Here’s my Classic Arepas, and check out this link for a list of classic fillings but fair warning; you’ll need to use your translator unless you read Spanish.

I first started making my Chicken Avocado Arepas after I saw them on Diner’s Drive-In and Dives the episode, Gone Global and that was before I had ever actually tasted an Arepa. Obviously, up here in Minnesota, some food is harder to find. We don’t normally have many people flocking up to the frozen Nord from warm tropical climates! Oh, it happens but let’s just say that our Minnesota winters are not for everyone!

This week, with the White House 30 Day to Slow the Spread (unless it’s been overridden by your Governor already)and our own Minnesota Stay at Home orders still in effect, I thought it was time to give my Arepas a little more love. It seems the perfect time to try something a little fresh and new and I have a new filling recipe coming out! I realized it was high time I highlight the actual process of making the bun itself.

The best thing about making the Arepas is that they are extremely easy to make. So easy a child can turn them out (they’d need help with the griddling part and the baking part) and many do. You basically just mix 4 ingredients, yes four! together, and the dough is almost like a moist playdough.

Divide the dough and roll it into little balls and flatten them into little cakes and then cook them. If you’ve ever made a mud pie, you can make an Arepa! Ya gotta love that! Of course, just like anything, the more you make them, the better they start to look so I don’t want to discount any arepa ninjas out there!

The Cornmeal for Arepas:

One thing to keep in mind about most of our Southern neighbors is that corn rules! Specifically, Masa, which is the name of the dough that tortillas and tamales (and so many other things are made of) but is also the name of the flour (Masa Harina) that is the powdered form.

I’m no “expert” on any cuisine, so this is an oversimplification, but there are two products labeled Masa Harina, and both can be made of either yellow or white corn. Even in Minnesota, where I live in the Twin Cities, both are pretty commonly available.

If you haven’t guessed yet, it’s the second that is used for making Arepas. It’s worth seeking out to make Arepas with, it’s not expensive (both types are downright cheap) and it might be more available than you’d think. It’s said to be starchier than the plain Masa Harina.

That being said, I’ve also (the horror!) made Arepa with the Masa Harina and it is heavier and denser, but still very good so I’d try it, but only if you’re in a pinch. The substitution is probably better if you’re not overly familiar with Arepas if you know what I mean! The photo, below, came from, and more information can be found at Cook’s Illustrated.

The process of making Classic Arepas is super simple. Add the Masarepa and a little salt to a bowl, pour over very hot or boiling liquid (usually water) over, add a little oil, and mix. Let it sit for about 10 minutes, covered. If I’m making my Chicken Avocado Arepas since I poach the chicken in water, I just use water from that. I don’t know that it adds so much flavor but it’s hot and it’s there! 1/2 milk or buttermilk and half water can sometimes be used, too.

When finished, it should be nice and squishy, but not sticky (if it is, add a little more Masarepa) and not crack (if it does, add a touch of water) when formed into a ball and squished into a cake. You can test a bit of it just by picking up a piece and manipulating it. I find when it’s dry outside I need about an extra tablespoon of water, and when it’s humid, it’s just fine as is. That might vary a bit for you and you really have to go by feel.

Just a note, not all recipes use oil, and some do but use less. The first time I ever made them, I used the three tablespoons and I love the way they turn out. I think it makes the dough very pliable and easy to work with.

The Dough should be moist and not crack

But it shouldn’t sticking to hands, either.

Then divide the dough, roll into little balls (I guess you could just flatten it and form it in your hand like a burger patty, but I find it’s easier to get them equal in size if I make them into a ball) and flatten them. Usually, I go with about 3/4″ thick and make 8 arepas from a recipe.

Then put a little oil in a large skillet or on a griddle and cook, turning once, until golden brown on both sides. Next, for the easiest way to make them, toss them in an oven at 360 degrees F. for about 15 minutes, right on the rack. That makes them cook all the way through (they should sound hollow when tapped) and a little puffier than if they’re just tended on the griddle until finished. Use the rack, though. If they’re baked in the oven on the same skillet or on the griddle you cooked them on, the bottom of the Arepa can get soggy. No one wants soggy bottoms, lol!

You don’t have to bake them; you can just lovingly tend your arepas on the skillet until it’s done and sounds hollow when tapped but I’m all about the easy, lazy way!

The dough changes after the rest.

I;m not the best former but it works

Out of the oven; I didn’t bake ON the griddle which can make them soggy

It always pays to shop well for any ingredients. If you do have a market that carries items like this, that’s going to be your best bet. Often stores in different parts of town, even if they are the same chain, carry different items and in an area with a more diverse population, you may find a better selection, higher turnover (fresher products), and better pricing.

Out of the oven; I didn’t bake ON the griddle which can make them soggy

Add the Masarepa and salt to a bowl. Mix in the liquid and the oil. Don’t worry if this looks too wet, the cornmeal will absorb the water. Cover with a towel or plastic wrap and set aside to rest for 5 to 10 minutes.

Check your dough. The dough should be smooth and not stick to your hands. If it appears too dry, add a little water and knead it in, then let it rest another few minutes. If too wet, knead in a little additional flour and let rest.

Divide the dough into 8 portions and using your hands, form each into a ball. Press to form a small cake about 3/4’s of an inch thick and about 4 inches wide. If the dough cracks at the edges, mix in a little more water and then form the cakes.

Heat the oil in a large skillet or griddle over medium heat. Sauté the patties, a few at a time, to form a light brown crust on one side, 5 to 6 minutes. Flip and brown on the other side. Don’t cook these too fast or they won’t be done in the middle.

When all the patties have been browned, transfer them to a rack or place right on the oven rack and bake in the oven about 15 minutes, or until they sound hollow when lightly tapped. Serve immediately with the filling of choice.

I’ll be sharing my Shredded Chicken (Pollo Mechado) Arepas at Fiesta Friday #325 this week, cohosted by me! That’s right, me! Also, I’ll be posting at The Weekend Potluck, a collaborative sharing site run by several of my favorite bloggers.