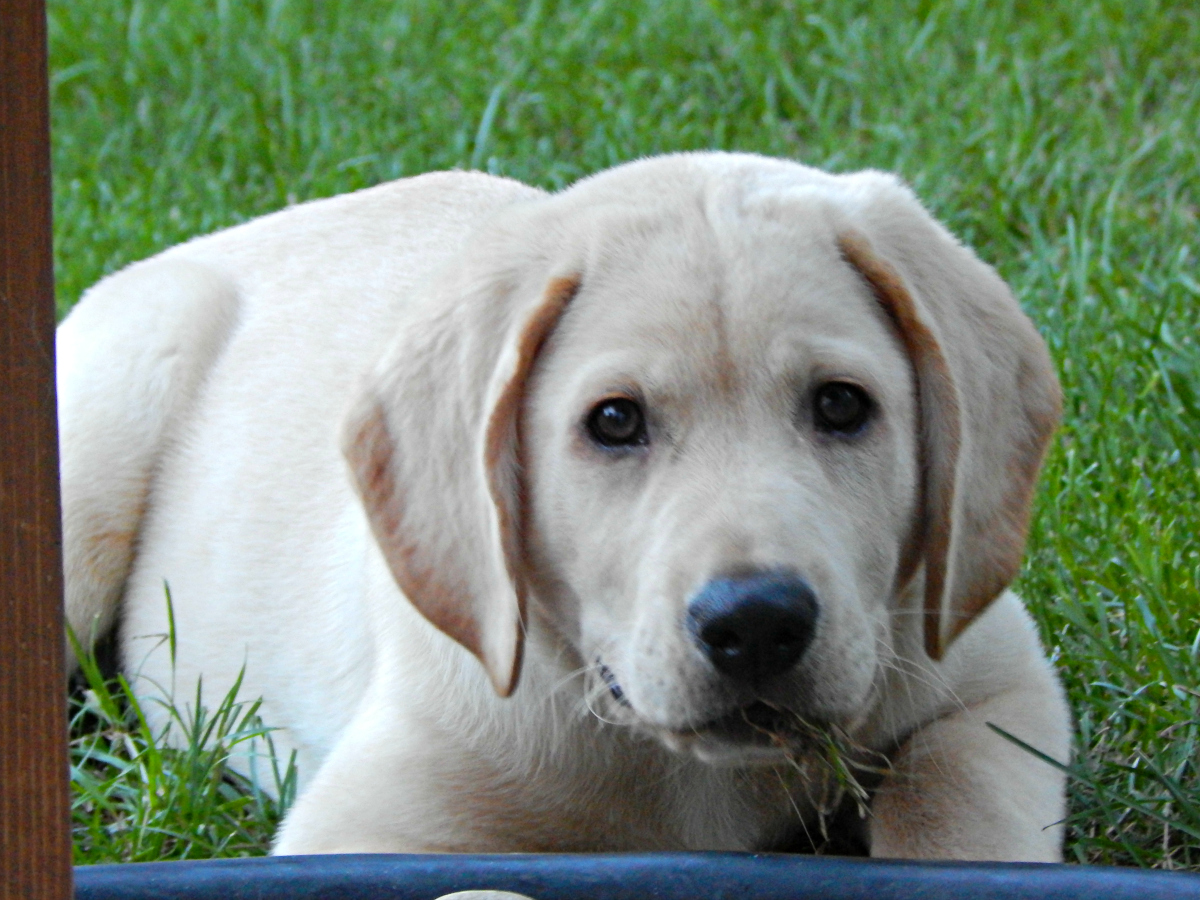 “You’re Drugging Your Dog?!” “I think bonding time is more important than his hip.” “He’s been neutered? Already?” “Look how dominant he is.” “That’s what happens when you don’t go through a breeder.” I even got lectured for even getting a dog. From people who had gotten dogs themselves in the past with absolutely NO say so or input from me at all. It’s amazing how everyone has an opinion…and I assume they’re well-meaning in their own way.

Chance in his cone.

If you’ve been following my posts for the last few weeks, you might realize I’m talking about Chance and heard about how he came to me. I was able to learn a bit more about him from the Humane Society. The poor guy had been passed around three or four times and ultimately brought in at about 8 weeks by a woman who said, “We just haven’t bonded.” I’m so glad she was honest enough and brave enough to give him up.

At the Humane Society, because he hadn’t had his shots, he was isolated and carried outside to do his business. And then the day before I was to pick him up, neutered. He was so excited when we got him home, just a little afraid of the grass and a bit tumbly wumby like puppies can be – their little legs can move faster than their bodies – but observing him, I noticed something didn’t seem quite right with his right hip and leg.

Chance had to go in a small kennel so he couldn’t jump – he could have layed the long way but seems to enjoy sleeping in weird positions.

In to our fave veterinarian he went first thing the next day – the vet who saved My Gibson more than once and put up a heroic fight for him at the end. A slight separation of the growth plate was the verdict. A few shots and other indignities culminated with a cone – oh the cone of shame, so he couldn’t lick his stitches from his neutering.

No jumping, no running. Close confinement. Drugs for the pain & to take the edge of his excitement off and keep him quiet. Carrying in and out to the yard (or bending over shambling alongside him to keep him from jumping) just about every hour – in effect, the same treatment he got at the Humane Society. Except he was getting heavier and heavier! In the first week he went from 17 pounds to 25, and this went on for almost three weeks.

Chance – thinking about going in for a rock.

And those who criticized and carried on just couldn’t seem to get that if Chance’s hip didn’t have a chance to mend, it would mean surgery and pins which would ultimately mean more confinement and more drugs. Talk about being cruel to be kind.

In effect, I had to do everything “wrong.” No socialization, no puppy classes, no obedience, no walks or mixing with other dogs. No running, no jumping, no stairs. He was crazed and turned into a barking, biting “land shark.” I was literally black and blue. He’d turn on me and give me a bite (not viscously, but puppy playing) and I couldn’t get my hand through to his mouth to remove those razor-sharp teeth because the cone was in the way.

I don’t know what it is about these rocks!

And the advice poured in, mostly put him on his back or pin him to the ground – which sent him into a violent frenzy. The few times I tried it, he would go on for about 45 minutes of struggling, growling, barking, then crying and finally on to the most pitiful howls before he’d give in. Then he’d be right back at it. It was just not working and seemed to be making matters worse.

I’m assuming he was “punished” this way (and maybe by a woman, because he acted differently with men) and perhaps that led to his hip injury. We had to find our own way, which meant I had to earn his trust. It wasn’t easy, but we worked (and are still doing so) through it. Patience and a special “hold” the vet showed me, pats and treats and cooing and encouragement during the good times & a lot of pretty mean, stern talk when called for.

See, there he is at the rocks again!!

With all this, it’s no wonder the poor guy was frustrated, and all I could hope for was that when Chance was finally freed, able to move around and off the drugs, he’d be able to work off some of that puppy energy and those puppy crazies!

And boy, did he ever! He zips around like a maniac. He goes after everything that moves. He chases butterflies, moths, and just about any bug. He loves to mess with the plantings in the yard and has this thing about picking up the rocks that line the patio and carrying them off to his favorite tree. Then he jumps on the rock with both front paws. I put the rock back and he finds the exact same rock again. And repeats.

Here, he’s just eating grass! But you know he really wants a rock…lol!

He’s growing like a weed and learning a few commands. He’s absolute trouble, but in a more normal puppy way. At least I hope so. There was the day he grabbed my bathrobe and turned so quickly in a frenzied circle with it that he had practically entombed himself in the center. Then he climbed out and humped it. I shudder to think what that might mean.

And then there was the day he launched himself at me and bit me in the behind. My son said, “Mom, your dog is kind of an A**.” And yeah, he is! That’s what puppies are. He’ll look right at me with that twinkle in his eye and a big grin on his face. And do exactly what he’s not supposed to.

And by the way, Homer still hates him and has learned to find high perches.