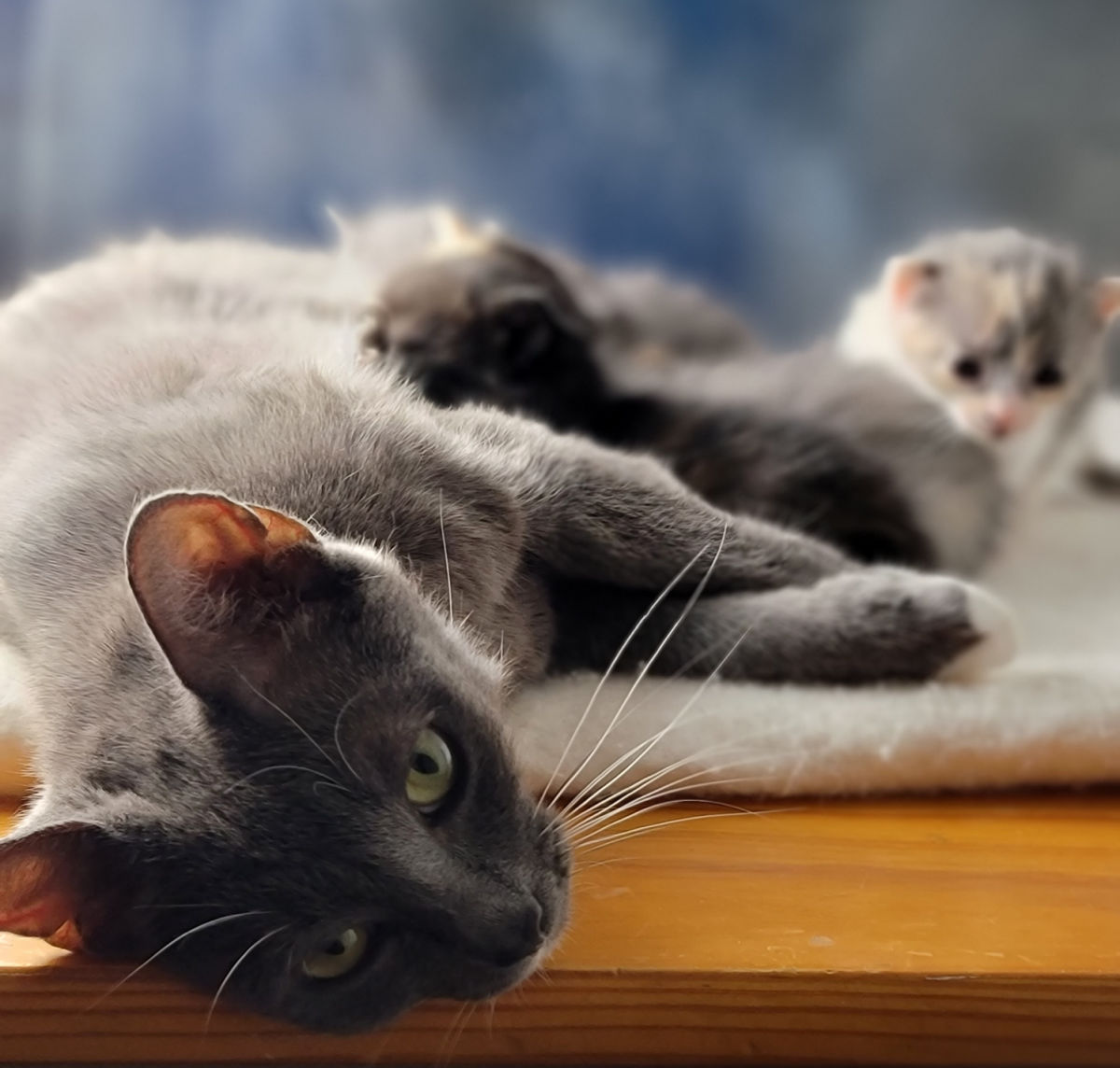 I hope you’ll indulge me while I show off our bounty of critters. If you follow me, you heard the story a couple of weeks ago when I posted Our Surprise. My daughter, Jessi, had promised the kids a kitty, and when she stopped by a garage sale, found two.

Being a bonded pair, we decided to take both…then we found out there was a Momma Cat, she was injured, the babies were still nursing, and a rescue group had failed to show.

Soooo – we took the lot. Long story short, we got more than we bargained for (there’s no such thing as a free lunch nor, apparently, a free kitty) when we realized a few weeks in that Momma was pregnant…with six more kitties.

So now we have my deplorable labradorable (he is so A.D.D.), Chance, Momma Cat, two older kitties, and six baby two week old (in these pics) bitty kitties. And of course, the six grandchildren who at least deserve a mention, lol!

When Chance was a pup, upon hearing Chance’s name, my brother gleefully dubbed him Chance the Rapper. Chance, by the way, is so good with the grandkids and the kittens – and an absolute scamp. (If you’d like to know how Chance got his name, check out my post Take a Chance on Me.)

And when we had the new litter, I started calling the two original kitties (Katana and Monty) the OG (original gangsta) kitties, just to differentiate which set of kitties I was talking about.

Momma Cat (the name just stuck) was originally from the streets of Gwinnett, Georgia and I was sure I’d heard a song somewhere/sometime, mentioning Gwinnett. It turns out there are many. I think they’re pretty much all rap and/or hip hop.

And Momma Cat, who the vet thought was only 10 months old, a baby herself, raised that first set of OG kittens outside. That makes her pretty gangster in my books. So maybe y’all might see where this is leading…

Here, making his debut is the largest of the litter, a sweet (and very cuddly) grey & white tuxedo, the first kitty to open its eyes. This one just had to be P. Diddy.

Next is Snoop Dog: light grey with white mitts and tummy, there are a few brown speckles here and there. This is a mellow little kitty who just loves to snuggle in and nuzzle.

Lil Wayne wasn’t named for the rapper’s signature gold & black dreds, but the coloring of this bitty, bitty calico is gorgeous. Watch the other photos and videos to get a glimpse of the coloring on her back.

If I had to choose a fave, it might be Notorious B.I.G. I initially thought this mighty lil’ kitty was going to be black but soon burnished rust began to appear. I didn’t know that torties (or like this one, a particolor tortie) developed color as they grew.

We just had to have an Eminem (even my son thought I was pretty gangsta when I assured him this cutie pie was paying homage, lol.) This tiny baby is quite the explorer and very vocal.

And last but not least is this little beauty, 50 Cent. This is the “runt” of the litter, but what she lacks in size, she makes up in personality. She’s a sweetie like her Momma.

Now the bitty kitties haven’t really been “introduced” to all six kids of the grandkids, although they’ve all taken a peek and the older ones have briefly held some of them.

We’re trying to keep everything serene and quiet for them. Well, other than weighing and the photo sessions I sneak in!

Chance, however, has met them and seems to have definite opinions about the amount of time I’m feeding all the cats, what I’m feeding them (and snatches the wet food if he gets a chance), changing the litter, bedding, weighing them (that’s a long story…whoever heard of such a thing? Guess I’m old-school, but I’m doing what I’m told) and so on.

We’ve been having so much fun with the bitty kitty posse, and it was fun playin’ with the names, knowing our time with them will be short-lived. In just a few weeks their lives will be forever changed and they’ll be off to loving new homes.

Thanks for indulging me…I never thought I’d have this experience so it’s a big deal for me and will be over way too quickly! I want to enjoy every minute of cuteness and I will probably post more pics as they change and grow. I hope you’re enjoying them, too!

You might notice an OG rapper not represented here, Tupac Shakur, 16 Jun 1971 to 13 Sep 1996. Instead of naming a cat after him, I thought a better tribute would be to leave a link, below, to the song Changes.

12 thoughts on “Kitties Kitties & More Kitties (and a dog)”