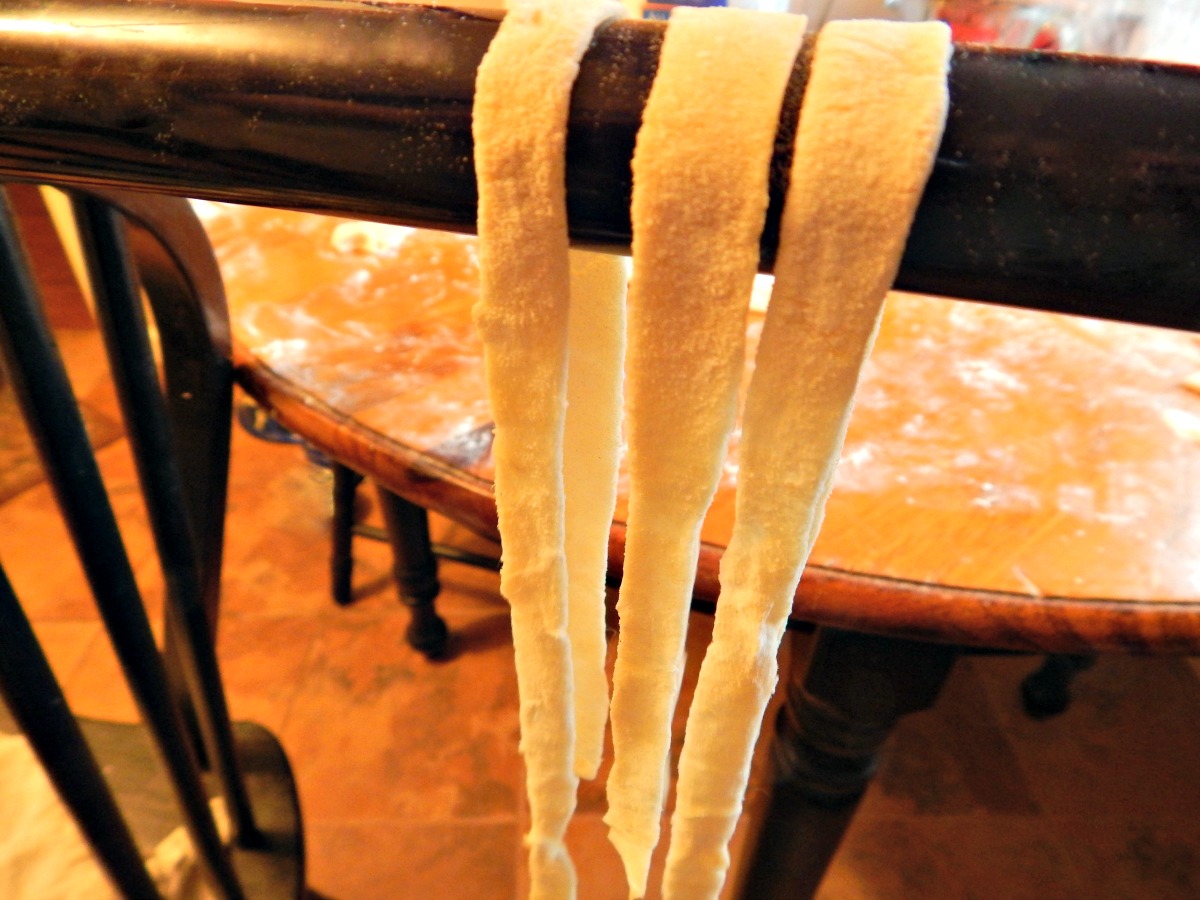 I have an affinity for old things – I was one of those strange children that was old by the age of five, and have only become older since. 🙂 My heart goes out to old animals, I love old recipes and methods, The smell of musty old archived papers or books sends me into a tizzy. If they only made a perfume that smelled old and musty, I’d wear it, too. So what’s that have to do with Homemade Egg Noodles? But speaking of old, please forgive my very old and not so great photos! I’ll be updating these next time I make them.

Put two hands together and scoop out a mound of flour (about a cup.) Put out an extra pile of flour and flour hands

Well, it seemed natural that when, as a young woman, I rented a house with two roommates, I became fast friends with the elderly woman, Maxine, who lived downstairs. She taught me how to make her Homemade Egg Noodles like she’d been making them all her life. And I’ve been making them ever since. Maxine, thank you – and you are still remembered every time I make these. I’m pretty sure these Homemade Egg Noodles are German in origin; I never asked Maxine her “pedigree” but the name Maxine is a dead giveaway.

If you’ve never had Homemade Egg Noodles, you’re going to be surprised at how good they are. Homemade Egg Noodles are a usually just a bit rustic, just a bit thicker and hardier than a commercial egg noodle. They’re a beautiful thing, tender with just of an al dente bite, unlike your typical dried commercial egg noodles which are often shiny and slick and lacking in any flavor or excitement.

If you want something close to one of those commercial egg noodles, you’ll need to roll pretty thinly, but after your first taste of Homemade Egg Noodles, all thoughts of those bland dried noodles will be driven from your mind.

This recipe is really as basic as they come. Very simple. Maxine didn’t even use measuring cups and taught me how to measure with my hands and by the eggshell. I’ll explain, below.

Some recipes I’ve seen for Homemade Egg Noodles use more egg, but I like this simple ratio. And I love that there’s no equipment needed but a rolling pin, and in a pinch, you can use a bottle or can. It is kind of nice, but not necessary to have a bench scraper. I’ve just gotten my first one, almost 40 years after I Maxine taught me this recipe.

Homemade Egg Noodles are really very easy and don’t take too much time, although sometimes dough can get a bit persnickety and hard to roll. You’ll know. It will feel tough. You’ll just cover it with a towel and give it a “rest” of about 15 minutes or so and it relaxes nicely. The first time you make our Homemade Egg Noodles, you’ll want to to allow 30 to 45 minutes.

After you make them once or twice it goes quite a bit faster – if all goes well and my dough doesn’t tighten up and become difficult and I don’t have to put that naughty dough down for a nap…er…a rest…I can knock these out in about 10 minutes. The noodles are more tender, though, if you nest them up and cover them with a tea towel for 30 minutes or so before cooking them.

I also like to serve Homemade Egg Noodles sometimes as a side. I’ll cook them in either water or broth, beef or chicken. Then tossed in a bit of butter and sprinkled with a few spices or herbs, they are – can I just say it? Sublime! What a lot of fuss about a noodle, lol, but they really are good. Try sprinkling them with a touch of caraway, celery seed or poppy seed and sprinkle the noodles with a few green onions, too. Or dress them up any way you like to dress up your noodles.

These Homemade Egg Noodles would also be great with my Best Beef Stroganoff (although we usually serve it with rice; either is traditional.) And they’d be wonderful in any of the old-fashioned Beef & Noodle recipes. I think maybe I might have to make that dish for my site. It’s not one you see very often any longer. And of course, these Homemade Egg Noodles would be great with an Alfredo sauce.

When I priced my Homemade Egg Noodles out, in March of 2012, they ran about 19 to 22 cents to make, and they usually (it can vary just a bit in weight when they’re finished depending on the season and exactly how dry your flour is) make about 14 ounces of noodles. Amazing, isn’t it, the mark up on “convenience” foods? Even the simple egg noodle. Now if you are a big couponer you can probably get your egg noodles on the cheap, but most of us expect to pay at least a dollar for 14 ounces to a pound on a great sale.

So woop woop you might be thinking. 45 minutes and I SAVE 80 cents? Remember, this isn’t so much about savings, but about the quality and how good they are, and if you make them a time or two, you’ll get really fast. But hold that thought for a minute, because these egg noodles are going to be more properly compared to a really good quality frozen egg noodle, and when you price those out at $3.00 to $5.00 a package, the mark up is immediately apparent.

As Maxine showed me: Put hands together and scoop up flour, place on counter, sprinkle with a little salt, put a well in the middle. Add egg, then fill up both halves of the eggshell with water and add. Smoosh around with your finger from the center out until dough forms a ball. Roll out. See the Photo Gallery, below, for detailed photos, instructions, and hints. It will scroll through the steps on its own so you can watch it as you work with the noodles!

For a more exact recipe:

Mix, using finger, from center out, using well-floured hands, until dough forms a ball. Do not knead or force flour in – the dough as it’s made picks up just the amount of flour it needs. Depending on humidity and how dry the flour is, there may be a bit excess flour. Dough should not feel sticky, only slightly tacky. If time allows, cover with a kitchen towel for 15 minutes or so, and if any point, the dough seems to be tough or hard to roll, cover with a clean towel and let rest for a few minutes.

Roll to desired size and thickness, keeping the dough moving freely on the counter, picking up and dusting flour under the dough as necessary.

Slice into desired lengths and sizes, short or long, thin or thick. May be used right away, but a short rest makes for a more tender noodle. “Nest” the dough and cover with a towel for 15 to 30 minutes or so. If desired, dust with flour and lay out flat, covered, for about four hours. If you wish to dry, hang over a clean dowel, chair back or broomstick, then gather and wrap tightly.

To cook, place in gently boiling water for 5 to 7 minutes. Noodles are done when they can easily be cut by a spoon against the side of the pan.

See the photo gallery at the bottom of the post for more detailed instructions, tips, and troubleshooting during the process.

This is the best way to clean up any flour mess, from these noodles, to pizza or any bread. It’s a couple of steps but for some reason, that cold water first works wonders.

Click on the gallery, below to pull up each photo, in sequence, with instructions.