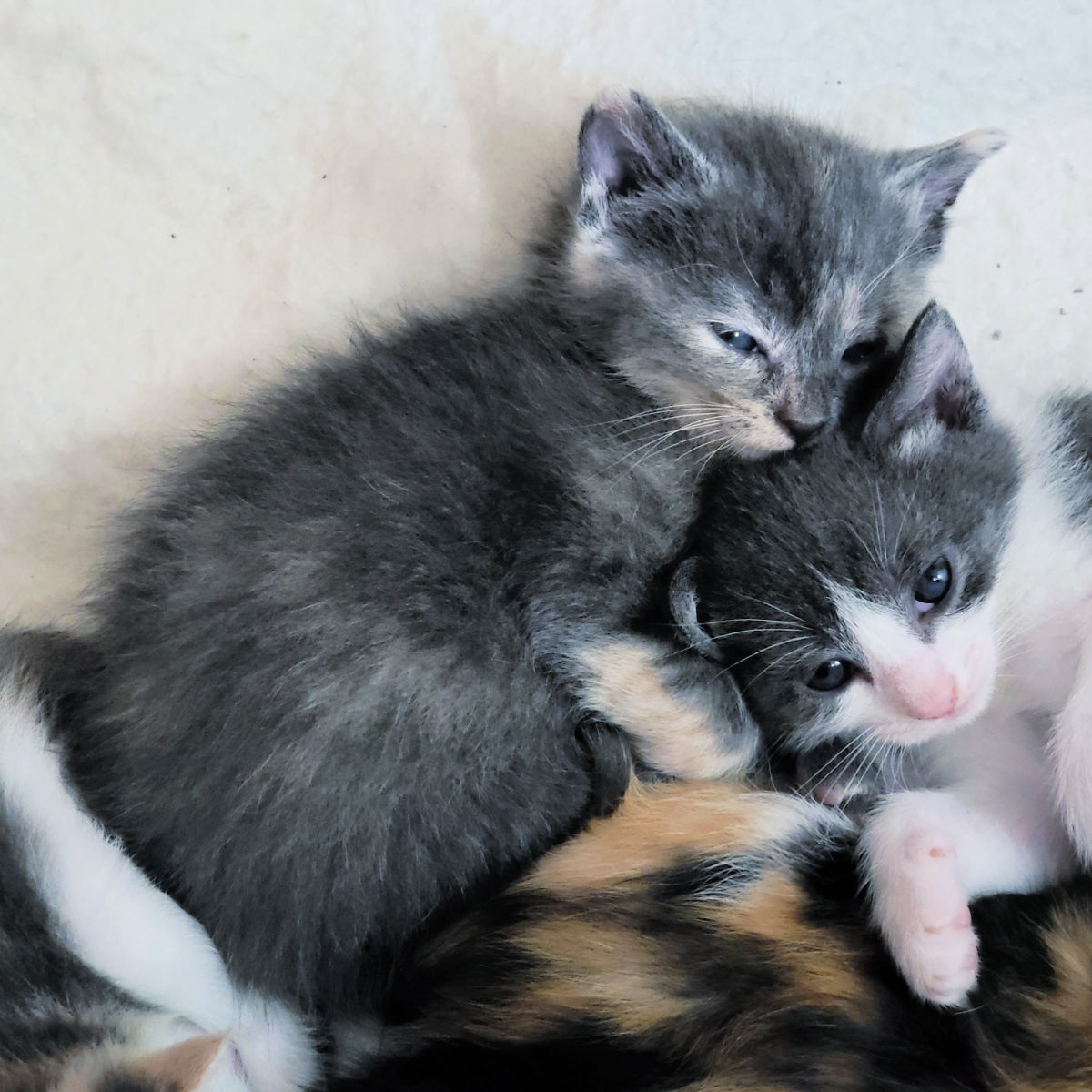 Ya gotta love a recipe that’s so easy, so low effort, and requires very little money. At first, that is. If you’re interested in learning how you, too, can get half a dozen kitties, read on! Or just push the button and jump to the recipe, below.

But wait, there’s more! We also have Momma Cat and the two OG kitties we adopted and my dog, Chance. The fun just never ends!

About Half a Dozen Kitties:

Here’s a little run down on week three of our kitten posse. The kitties are def beginning to look like real kitties, complete with fur on those little rat paws! They’re lurching about, grooming themselves and each other, and play fighting.

We have them in my bathroom (so they have a quiet place away from the six grandchildren) in a cardboard box. The mighty Notorious B.I.G. was able to scale the box’s entry this week – but I kept finding her meowing piteously, cold, and shivering, unable to find her way back to her siblings.

Baby kitties rely on their posse to keep warm; they don’t regulate body temperature well. The solution was hardly elegant, but neither is their box. I taped extra cardboard to raise the doorway. By the end of the week, the little scamp mastered the new height!

P Diddy – this is the largest kitty and is so mellow! She’s often napping on her back.

I noticed while changing bedding that all the bitties were able to find their nesting box and were trying to get back in on their own, so the door was lowered again. Now they have free access although we’re all checking on them and listening for cries.

Now here’s a kitty, lil wayne, who might always wonder if you got his good side!

They’re also pottying on their own (and soaking the bedding) but they are beginning to use the tiny baby litter box I made them. Most are starting to eat and drink some of Momma Cat’s (we’re feeding her kitten food for the extra calories) food and water.

Eminem is a bit of an explorer…and very vocal.

So this is it, the week we go from relatively carefree cuteness to mess, mess, mess! And to complicate things, Momma sometimes springs out with a kitten in her mouth when we open the door and the chase is on!

50 cent is the “runt” and so sweet. She reminds me of Momma and I love her little button eyes!

Making Half a Dozen Kitties:

We were able to shortcut the “normal” means of having kitties! We were considering one kitten, then Jessi (my daughter) went to a garage sale and found two…they were so cute, the last of a litter, and obviously a bonded pair.

And I know some of you had heard this tale before, but then we found there was a Momma Cat, the kitties were nursing and Momma was injured. A rescue group had failed to show, so we took the lot of them. We were so happy Momma was picking up some weight and looking so healthy, lol!

Once we found out that Momma was pregnant, a few days in advance of the estimated due date, Jess researched nesting boxes and she and a friend (thanks again, Tetra, for all you do) made a makeshift nursing box. Trust me, it looked SO much better at first!!

It’s getting a bit worn now (but easily replaced) but has worked so well. The size seems to be perfect for Momma and all the bitties and allows easy access for Momma to get in and out. For the first three weeks, the most critical time, none of the kitties (except for Notorious B.I.G.) was able to make it out of the opening.

If I were to do anything different, it would be to not have the top of the opening meet the top of the box; over time, the box has loosened a bit and the flaps don’t close quite as well. A strip 2 1/2″ or so across the top of the side of the box would have held the box tight and given us better light control.

You can see how it would be easy for me to raise the height of the doorway by adding an extra strip of cardboard. That’s much easier, actually than starting out with a higher entryway, to begin with, and then attempting to cut it down.

Seems like this is as good of a place as any for a random, quick little video of Kenzie and Chance. We have no idea where Kenz learned the word “Naughty” and the finger point. We’re not into shaming, here, (maybe at Dad’s?) but it is cute.

The box is lined with a plastic garbage bag securely taped to the bottom, then a folded-up towel, and then the best thing ever. We had an oldish, cheap blanket (I think it was a full) and you probably know the kind: they look great at first and then start to pill and matt-up when they’re washed. I was happy to put it to good use. I cut it into fourths and each piece, folded in half, fits almost perfectly in the box.

When we wash the bedding, which is changed daily we do use a bit of bleach (we use white towels) and an extra rinse. I’ve also made sure that Momma had a folded blanket or folded towel for her own resting place outside the box.

Just like human babies, bitty kitties do build immunity from nursing, but cleanliness is so important. Washing hands before handling (and after) is a must and no one should be wearing shoes that have been outside.

A daily changing of bedding is a must, too, especially once they start urinating. Ours began doing the deed around 3 1/2 weeks.

A shallow container for food

Up to now, with the kitties being mostly in their box, cleaning has been easy. Now that they are out and about at will, there is constantly spilled food and scattered litter. I’ve been removing the kitties, changing the bedding and litter, then sweeping and quickly mopping the area as needed. I let it dry and air before the kitties go back in.

Ever since Notorious B.I.G. scaled the box, I’ve had kitty food out in a shallow container; it’s really just an old container deli meat came in. It’s hard to spill and the dimensions are 2″ by 6″ by 9″.

For the water, one of Chance’s little puppy bowls is standing in. It has a flat bottom so it won’t spill and is about 2 3/4″ tall and 6 inches across. The water needs to be checked often to make sure the level is high enough to reach.

After trying several solutions for the litter box, I found a clear, plastic container that held some croissants worked the best. It’s about 10″ x 13″ and 2″ high. Maybe your store’s bakery would just give you a couple. It’s shallow and hard to turn over. I’m sure we’ll be looking around for something bigger in a week or two!

Fun fact: I’ve read that it’s helpful to save out a few clumps from the soiled litter and add it to the fresh; innoculate it so to speak, so the kitties can smell and understand what to do and where.

While this seemed a little ridiculous to me, I’ve been weighing the kitties. First, it was suggested by my daughter. I scoffed. I had just figured if Momma Cat was gangsta enough to raise her first litter outdoors, she could certainly raise her second in the luxury of a cardboard box in my bathroom, lol!

The vet confirmed they should be weighed just to make sure all the kitties were gaining at least 10 ounces a day. I had already been keeping a watchful eye and making sure the ittiest bittiest were getting “titty time” and latching on, rotating them now and then.

Despite my efforts, all the kitties just seemed to gain weight proportionately, and eventually, during the third week, weighing became more problematic and fell by the wayside.

Saving Money on Half a Dozen Kitties:

The best way to save money? Don’t have kitties, lol!!

The other is to look around for makeshift items that are probably going to work better than any specialized items you might find at the pet store!

Half a Dozen Kitties

Think about getting a kitten. Go to a garage sale and decide to get two. In a fit of compassion, decide to get Momma Cat, as well.

Wait, pleased, as she picks up weight and starts filling out, at least until you realize she’s preggers. Set up a nesting box and wait longer, as you have no idea who the baby daddy is and/or when the deed happened.

20 thoughts on “Half a Dozen Kitties”